Newly awakened, and with no permanent location to call home, Tenno warriors have aligned to construct secret temples of their own. The architecture within is distinctly Tenno in origin, but these hidden places of bonding, training and meditation are undeniably influenced by Orokin architecture.

In order to access the Clan Dojo the player must first construct the Clan Key.

When Update 9.5 was released, clans were given the option of keeping their current Orokin tileset or upgrading to the new Tenno tileset. Those wishing to upgrade had to fully deconstruct their entire Dojo, down to the initial Clan Hall. Once this was completed, the Clan's Warlord could initiate the upgrade from the Hall's control console. Those who did not upgrade were able to keep the original tileset, however, it was locked down and no further changes to room structure can be made, despite the room space or resources available. 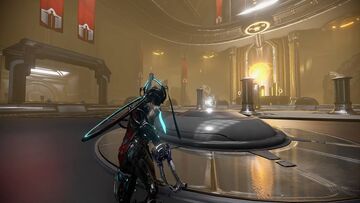 Note: The following section describes processes and information applicable to Dojo 2.0, utilizing the Tenno tileset. It is not known how accurate this information is in regards to those using Dojo 1.0, a.k.a., the Orokin tileset.

The process of constructing a Clan Dojo can range from being incredibly simple to incredibly complex, depending on the desires and plans of the clan members involved in construction. Due to certain aspects of how the placement system for Dojo tiles currently works, if a Dojo is not fully planned out prior to starting construction, the architects can run into a variety of problems, sometimes requiring half of the Dojo to be destroyed to take into consideration something that was originally left out. This tends to become a tedious and frustrating activity, especially given that Dojo rooms require either 12 or 24 hours to construct, resulting in a process that could range from a week to around a month, depending on design complexity.

Because of this, it is generally considered a good idea to keep the following concepts in mind during planning and construction. Given the cost in time to go back even two or three rooms during the Dojo's construction, extra time invested in the planning process is quickly made up for in the time saved.

Note: The following sections describe fundamental concepts for the Clan Dojo. These concepts may reference room or decoration types which are further described in the Rooms and Decorations sections located after this Concepts section.

The Dojo Capacity pool limits the amount of rooms that can be constructed in a Dojo. The construction of Clan Halls increases the size of this pool by 200, with the exception the first Clan Hall, and the Inspiration Hall, which contribute 100 capacity each. All rooms other than the Halls will consume a predetermined amount of the Dojo's Capacity. If a room requires more Capacity than is available in the pool, the room cannot be added.

Because of this, it is important to plan ahead for the locations of your Clan Halls. If there is not enough Capacity to construct connector hallways leading to where the clan desires a particular Hall to be placed, the clan will need to destroy existing rooms and all of the decorations inside that room in order to free up the needed capacity.

The Dojo's Energy pool limits the amount of rooms that can be constructed in a Dojo, but not decorations, which are limited solely by capacity. Except for Reactors, every room within a Dojo consumes a predetermined amount of the Dojo's Energy. The Energy pool can be increased by constructing Reactor rooms anywhere in the Dojo. Each Reactor adds an additional 25 Energy. As with Capacity, if a desired room requires more Energy than is available in the pool, the room cannot be added.

Though it is not officially documented, at the present time, the Dojo only supports up to 100 rooms. Once the limit of 100 rooms is reached, all expansion doorways that are unused will display the words "Dead End" and prevent the clan from expanding the Dojo further. Rooms may still be removed to back away from this limit and permit expansion.

The Clan Vault is an important concept to understand when it comes to building and funding both the Dojo itself and the research projects available within. The Vault is essentially virtual storage for every single resource that the clan owns, including Credits, Resources, Platinum, and Forma. While any clan member can contribute Credits directly to the Vault by interacting with the Treasury decoration.

As of Update 22.16, clan members can contribute Orbiter Decorations to the Clan Vault to be used for decorating the Dojo.

As of Update 23.7, it is now possible to also donate resources to the Vault.

Note: See the Funding Phase and Destruction sections for more information relevant to the Clan Vault.

The Clan Tier determines the member cap and research cost multiplier for a Clan. Clan Tier is directly impacted by the construction of Barracks within the Dojo. See the main article for more information regarding this subject.

See Prerequisite Trees for a complete listing of all known prerequisite trees.

To queue a room for construction, the architect must locate a door displaying the words, "Available Node." This door usually bears white lights, as opposed to "Dead End" doors which display red lights. By interacting with the door, the architect will be prompted with a list of rooms available for construction. Selecting a particular room will display the associated costs and construction times, as well as display the room's map tile and a brief summary of what the room is.

If there is not enough Capacity or Energy to support the selected room, the architect will be unable to queue the room for construction. Interestingly, when any room cannot be placed where the architect is present due to limitations of space, the room will simply not appear in the list of rooms available to be queued. This is most often observed with large-scale rooms such as Clan Grand(est) Halls, the Hall of Honor, the Observatory, and the Obstacle Course.

Once a room is queued, it enters the Funding Phase of construction.

During this phase, a gold hologram of the room will be displayed on the other side of any accessible doors while it waits for the resources required to build the room. Resources can be donated at any door, though the doors will not permit entry into the room during this phase. One Forma is needed to build every room, as well as the Trading Post and some other decorations, so it's best to stock up on Forma using Void Relics.

At any point up until the room is fully funded, the architect may access the contribution dialogue and cancel the room's construction. This automatically refunds any and all resources or credits contributed by clan members to their personal stores. Note that any contributions made by a Treasurer from the Clan Vault are returned to the Vault, and not to clan members.

Once the room has been fully funded, the Construction phase will begin automatically.

Once a room enters the aforementioned Construction phase, the gold hologram will change to the standard dark blue color, and all doors leading to the room will display a countdown timer and a circular progress indicator, denoting the amount of time remaining until the construction is complete. At this point, clan members may donate Platinum to accelerate ("Rush") the construction process and reduce the time remaining on the countdown clock. A minimum of 1 platinum may be donated, and each platinum donated will decrease the timer by a small amount.

Once completed, the architect may go back and queue additional rooms that branch from the new one, or queue the room itself for destruction, if they wish.

Destruction of Dojo rooms may be initiated by any member with the Architect role. Once initiated, the room will become a red hologram and a countdown timer will be displayed on the room's control console. The destruction process requires two hours to complete, after which all players present within the Dojo will be forced to reload the map, after which the destroyed room will be gone. If a player is present in the room queued for destruction at the end of the countdown timer, they will be teleported to the Dojo's spawn point upon reentry into the map.

Note that destroying rooms such as Research Labs will not reset any research projects that have been completed within that lab. It may be destroyed and rebuilt elsewhere, and the clan members will still have full access to the researched blueprints once the new lab is complete.

Any resources that were initially spent to fund the room that was destroyed (including Credits, Forma, or Platinum) will be refunded to the Clan Vault only. Once refunded, these resources may be contributed by a Treasurer to fund research projects, new rooms, or even the reconstruction of the destroyed room elsewhere for no additional cost to clan members.

Note that certain conditions must be met before the Dojo will allow an architect to queue a room for destruction.

The known construction trees for Dojo rooms are listed below. Note that items on the same level require the prerequisite from the upper level, but are otherwise independent of each other.

Polychromes are colors which can be used to decorate the Clan Dojo. They can be researched using Pigments at a substation within the Tenno Research Lab, and require thirty-six hours to complete upon the acquisition of all components.

As of Update 9.5, the Dojo is overhauled with new version of existing tilesets. These tiles have a different interior design and slightly different sizes to fit the new "grid" system, which allows better tile management and multiple entryway looping. Here is some information regarding the conversion from old tiles to the new tileset:

We've added some much-requested items to Clan & Dojo management to make decorating and contributing much easier!

Retrieved from "https://warframe.fandom.com/wiki/Clan_Dojo?oldid=1996543"
Community content is available under CC-BY-SA unless otherwise noted.