Clans are groups of players associating themselves under a single name, similar to a team, but potentially on a much larger scale. A Fan Site Kit is available for download to help clans make their websites look legitimate. The Kit provides various WARFRAME-related renders, banners, images, and more.

The Dojo is only available to clans and provides a "home base" that can be utilized by any clan member. The Dojo also houses facilities necessary for Research and Trading.

Research can be started and funded by clan members within the Dojo. This unlocks unique blueprints that cannot be acquired through other means, with the exception of purchasing items through the Market using Platinum.

Clans can construct Trading Posts within their Dojo to allow clan members to take advantage of the Trade System. This can also be done by holding Q to setup a shop in the Dojo.

Members of a clan are able to access their clan's Dry Dock, being able to upgrade their Railjack, craft Railjack components and armaments, upgrade Avionics, and host their own Empyrean mission sessions. 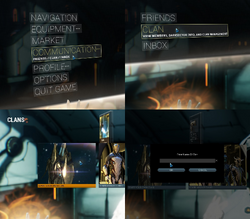 Joining a clan is done by being invited to a clan and accepting the invite.

Clans can be created in the game by selecting the communication tab, then selecting "Clan", and within that, "Start your own clan". Your clan will be created after typing in an appropriate name.

If the user is the Founding Warlord of the clan, while in the "Communication", "Clan" menu, clicking on the username and select the option to leave will delete the clan.

Clans are organized into several tiers, each of which grants a Clan a certain maximum amount of members and regulates inter-clan competition. At the same time, each tier has a direct impact on the cost of all items or research funded by the clan. This is done in an effort to keep gameplay fair according to the size of a clan.

Clan Tier is upgraded by constructing the Barracks associated with the desired clan tier. Clan Tier upgrades must be done in order, ascending from one tier to the next until the final tier is reached.

As of Update 18.0 (2015-12-03), clans can be downsized, which can be helpful if the player count of your clan is unable to easily contribute to Clan Research. Clans cannot be downsized while an in-game event is in progress.

The table below outlines each tier, the member capacity of each tier, and the Barracks required for each tier.

As mentioned in the Clan Tier section, each tier incurs additional costs for research, rooms, and decorations. This is done in order to balance gameplay, ensuring that clans with many active members don't rapidly outpace clans belonging to lower tiers. Overall, this results in balanced gameplay and ensures fair costs for each tier.

The list below displays examples of the scaling costs of each tier as a result of the Tier Multiplier mechanic. See #Clan Tier for the actual multiplier values for each clan tier.

Interestingly, it would appear that the in-game costs displayed to players are not the result of a live or real-time calculation that utilizes the Tier Multiplier. This can be observed when reviewing the cost of

Forma to fund Dojo rooms. In several instances, the first three clan tiers may require a single Forma each, with the last two jumping to much higher levels, such as Mountain requiring eight Forma and Moon requiring fifteen. Outside of Forma, however, the Tier Multiplier is observed to directly dictate all clan costs.

Multiple clans with mutual interests can unite and form an alliance. An alliance can house a maximum of 4000 members, regardless of the number of clans. Clans in an alliance can share a Vault.

There are 8 positions available in a clan's hierarchy. These positions are not strictly seniority or levels of authority, but rather a set of "privileges" for a player within the clan. Players are assigned a position by anyone with the Promote role (up to their own position by default) or Regulator Role (top 2 by default) by clicking on the member in the clan view of the contacts window in-game. The clan Warlord is able to change the position names as of Update 9.0 (2013-07-13).

Clan creators will always start with the Founding Warlord position and will have all available roles assigned to them by default.

The table below provides descriptions of the capabilities each role provides clan members when assigned.

New clans are created with the default set of role assignments. Both assignments and role names may be changed by clan members with the appropriate roles.

The Clan Emblem is a purchasable accessory that displays a holographic image of your clan's logo on your Warframe's shoulder. You can also add the Clan Emblem to the side of a Sentinel or Companion.

There are millions of clans in Warframe. Some of them are listed on this wiki at Category:Clan List.

The amount of Clan Affinity earned by building Rooms or Decorations is listed in their respective selection screens. Research entries have been given the same treatment within the Lab UI.

Once begun, the Ascension Ceremony runs for 72 hours. During this time, clan members that have been in the clan for at least a number of days equal to the rank being obtained (i.e. 1 day for rank 1, 7 days for rank 7) may interact with the Ascension Altar decoration in order to gain Endo relative to the change in Clan Rank (each Rank gained grants 1000 endo x new Rank). The clan members who start the ceremony gain this reward at the time they interact with the altar, even if there are not currently enough participating members to start the timer. If a clan goes up by two or more ranks during this event, players that claim the Endo reward will be given the amount for the rank being acquired, along with the Endo that would be awarded from previous ranks. For example, if a clan goes from rank 0 to rank 10 in a single ceremony, players can claim 55,000 Endo total, as that is the total of all previous rank rewards being added to the rank 10 reward.

Do you hear that Tenno? Maroo is calling. She’s got some great intel on where to find new Clan members. We have added some new features to Clan recruitment to supplement finding Clans and attracting new members.

Clans can now post ads by visiting Maroo in her Bazaar or accessing their Clan Menu and paying Maroo an administrative fee using resources from your Clan Vault. Each week, Maroo will be in need of a different resource for her own ‘endeavors’ and in exchange she will put the word out for you. These ads will appear in the updated Clan Menu under ‘Search for Clan’.

Clans can leave a brief description about their Clan’s interests and also add flags to help prospective members filter ads. These flags include:

Clan ads are displayed for 8 hours and then expire. During this time, prospective members can apply for a Clan and send a message to anyone with the new ‘Advertiser’ role for review and approval. If your Clan reaches maximum member capacity while your ad is live then your ad will be hidden until it expires or if you are no longer at capacity. If you apply to multiple Clans, then the first Clan to accept you will be your new family and all other applications will be immediately withdrawn.

Like many other areas where you are able to provide a custom message, players can report a Clan ad if it violates any of our Terms of Service, Code of Conduct, or leads to any form of discrimination or harassment of other players. Recruit to your heart’s content, Tenno, but as always we ask that you keep Warframe a welcoming space for all.

This new feature is not meant to replace the ways that Tenno connect, but rather add a streamlined avenue to find and connect with others. For more on this feature, please read our post here: https://forums.warframe.com/topic/1305861-additional-clan-recruitment-tools/

If you're not an active participant in the Clan / Dojo system, a lot of this will go over your head. But if you've noticed a discrepancy in your Clan's Dojo XP since the release of Update 25, we have found the issue and have a full breakdown here.

Upon researching the Update 25 Clan weapons, some Clans / Dojos had a loss of Clan XP. On the surface this seems like a pretty straight forward problem, but it has turned out to be a bit more complicated. Your "Clan Profile' page showed research and Pigment XP gains, but there was a whole bunch of invisible XP messing with values especially if you deleted a decoration or room, and finished weapon research (namely, from Operation Trophies)!

As we release eligible content, you can re-rank your Clan over time. We have record keeping of your rank, so you won't re-trigger the rank up rewards.

We have a list of rooms and objects that grant you XP, but only if they exist within the Dojo (i.e cannot be built then destroyed). This now works properly + and we are working to highlight this fact more (as we work to expose in UI):

The amount of Clan Affinity earned by building Rooms or Decorations are listed in their respective selection screens; Research entries have been given the same treatment within the Lab UI. A Research tab has also been added to the Clan Profile, which will list all research and its state of completion per Lab!

Don’t worry if your Clan has already done all or part of the above tasks - the rewards are retroactive! The appropriate amount of Clan Affinity has been given to all existing Clans with this Update.

All existing Clans are currently at the initial Rank, regardless of their Clan Affinity. Once its members complete the Ascension Ceremony, the Clan will Ascend to the highest Clan Rank attainable with their current amount of Affinity.

What is this Ascension Ceremony? If you have earned enough to reach the next Rank, a new Decoration called the Ascension Altar will become active! To participate in this Ceremony, a clan member simply needs to interact with this device. Depending on your Clan Tier, a certain number of members must partake in this ceremony in order to reach Ascension, but under no time limit.

Participants will immediately be awarded Endo upon interacting with the Altar, and any remaining Clan members will be able to interact with the Altar and receive an Endo reward within 72 hours after the Ascension Ceremony has been completed. Participants from Clans who have enough Clan Affinity to Ascend multiple Ranks will be rewarded with Endo from each individual Rank.

The required number of participants per Tier are as follows:

The amount of Endo awarded per Clan Rank is as follows:

For Clans who have earned the current max Clan Affinity at the time of this update, completing the Ascension Ceremony will award each participant (and any other player who interacts with the Altar within 72 hours after its completion) with a grand total of 45,000!

To remove any confusion between these new Clan Ranks and the existing ones, Clan Hierarchy is now used to describe a player’s position within the Clan, whether they are a Warlord or an Initiate.

All of these changes are the foundation for a larger system planned for release later this year, so stay tuned, Tenno!