For the main narrative arc, see The New War.

Investigate your personal quarters upon completion of The Sacrifice.

Chimera Prologue is a short main Quest released in Update 23.10, and is the first act of The New War. This short quest explores the fate of Ballas after the events of The Sacrifice, foreshadowing Natah's plan to create Amalgams.

The Man in The Wall manifests itself in the Orbiter's Personal Quarters, luring the Tenno towards the Lotus' helmet, dropped during the events of Apostasy Prologue. When the Tenno touches the helmet, they are transported to Lua, where they begin to follow The Man in The Wall. The Man in The Wall leads the Tenno through the Resevoir, and into the Chamber of the Lotus. A portal at the end of the room transports the Tenno into a Sentient chamber that imprisons Ballas, now malformed with Sentient growth. Cursing the Lotus for deceiving him, Ballas discreetly constructs the "Sentient Slayer" away from Lotus' watchful eye. The Tenno grasps the image of the legendary

Paracesis , learning it's blueprint in the process. — The New War is coming.

This quest can be accessed directly from the Codex as a chapter of The New War quests, after completing The Sacrifice.

In the Orbiter's Personal Quarters, The Man in The Wall sits on the plinth that carries the Lotus' headgear, donning it with a sinister laughter before vanishing and returning the helmet. Approaching the headgear and touching it will transport the Tenno to Lua.

After loading in, the player will be dropped onto Lua. They must follow The Man in The Wall, who continues to wear the Lotus' headgear. Three times during the chase, The Man in The Wall will trap the Tenno inside of a barrier, forcing them to fight shadow-like reflections of the Lotus.

The Tenno are lead through the Reservoir and into the Chamber of the Lotus, where they encountered the Lotus and Ballas during Apostasy Prologue. At the end of the chamber is a portal that the Tenno must enter.

The portal takes the Tenno to a chamber of Sentient design. In this sequence, the player will no longer have control over their character, instead using the fire button (LMB ) to Void Dash to certain spots indicated by a glowing light.

At the end of the chamber, the Tenno spots Ballas, now Sentient-turned, lamenting the loss of his narcissistically beautiful Orokin body and curses the Lotus for her deception. Ballas' eye suddenly glows, which he implies to be the Lotus' vision. The player must stay out of Ballas' sight by using numerous Void Dash points around the room. If he catches a glimpse of the player, a bar at the top center of the screen will decrease. If the bar empties, he will spot the player and the mission will fail.

As Ballas rambles, several metal fragments fall in place in the middle of the room. Upon realizing the presence of the "devil", the pieces come together to form a sword and Ballas instructs the player to take the "Sentient Slayer" for their upcoming war, before looking away. As the Tenno dashes and grips the sword, Ballas abruptly turns to face them and the Lotus' whisper calling for the Tenno can be heard.

The Operator finds themselves back on the Orbiter as if everything they had experienced was nothing but a vision. They find themselves armed with the blueprint for the

Completing this quest is also a prerequisite to combating the Ropalolyst on its Assassination node; The Ropalolyst, Jupiter. 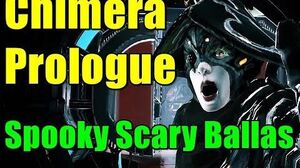 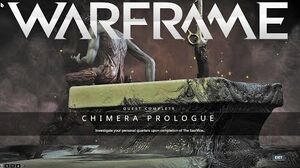 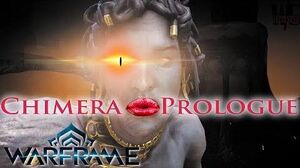 Retrieved from "https://warframe.fandom.com/wiki/Chimera_Prologue?oldid=2151034"
Community content is available under CC-BY-SA unless otherwise noted.