Chargers are quadrupedal abominations resembling canines made from Grineer (possibly Lancers) that almost always hunt in packs. They will quickly and repeatedly claw at players once in range, and their attacks have a chance to stun their foes (but not players) on hit. If their target is out of range they will hold position and lob balls of mass at their target which do not ignore shields.

Being one of the most common Infested, on Defense missions they are the main source of damage to the objective and should be the main target. A single Charger can dish out higher damage per second than even a Toxic Ancient. In fact, multiple Ancients may be allowed to attack the objective with less risk as their attacks have more delay but multiple Chargers will quickly whittle it down with their quick swipes.

Visually, chargers are unique in appearance compared to other Infested, most notably the adaptation to using their previous host's arms as additional legs, essentially turning them into canine-like abominations. The original host appears to have been a Lancer who was transformed facing upwards, as the spines protruding from the charger appears to be the Lancer's rib cage. The head of the lancer remains intact but is pushed back and toward the ground where new infested mandibles grow out of the neck which forms the creature's new "face". Despite being mutated from a heavily armored lancer, all charger variations, except the Deimos Charger, do not have any armor and full damage is dealt from any angle.

These spawn on dead Kavor Defectors. The Eximus version of this has about a 1 in 10 chance to spawn in place of a Carrion Charger. 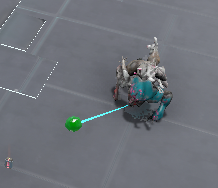 Charger launching their ranged projectile when player is out of reach 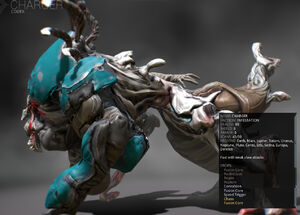 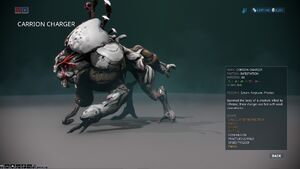 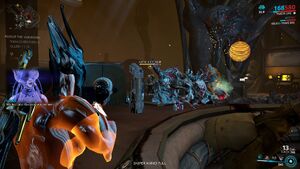 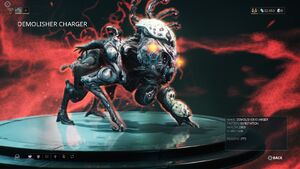 Demolisher Charger, as seen in the Codex