Chaos Augment: Enemies entering the Effect Range will be inflicted with Chaos. Effect Range lasts for 50% of the ability duration and shrinks over time. 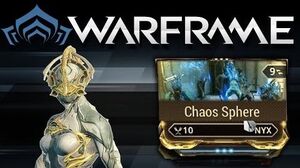