Swazdo-lah, Tenno! Welcome to Cetus, unique among the stars! Explore the bustling market for all your practical needs! If you're looking for adventure on the Plains of Eidolon speak to Konzu. Stay a while, and come back anytime on your journeys across the Rails.
—Introductory Description
While their floating markets may ply the rails of the Origin system, Cetus is the Ostron home: a trading hub where travelers from across the system meet to exchange information, wares and plunder in safety, protected by the Unum-enforced laws of barter and parley - free from the influence of Grineer and Corpus.
—Cetus Fragment

Cetus is a village built by the Ostrons, located to the north of Mantle, Earth. A humble settlement, located in the south region of the Plains of Eidolon, they are guided by a secretive order named The Quills, loyal to the ever-mysterious Unum, who constantly watches over the plains keeping her people safe from Grineer aggression.

As a city hub, players can interact with various NPCs to purchase items from shops, or accept quests or bounties to be completed out in the plains. Players can enter the plains via a large Orokin door on the town's outer wall, leading to a large room that has another door that leads to the plains beyond. The room acts as a loading screen, and players will be unable to exit out the other end until the loading is complete.

The Quills are a mysterious monastic order that serve the equally enigmatic Unum, a being who resides within the Orokin Tower at Cetus in the Plains of Eidolon. They have very close ties to the Ostron people who also praise the Unum, and are seemingly knowledgeable about the secrets of the Tenno. They are said to be able to divine the future, which combined with their information gathering prowess allows them to preemptively end threats to Cetus through their operatives.

The Plains of Eidolon is an expansive, open Landscape connected to Cetus, an Ostron settlement located on Earth. In the shadow of the Orokin Tower of the Unum lies an ancient battlefield, where an enormous Sentient was defeated during the Old War by

Gara. The Grineer have set up numerous outposts and bases to study and mine the ruins in the area, observing and patrolling the plains for any threat to their operations. 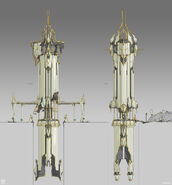