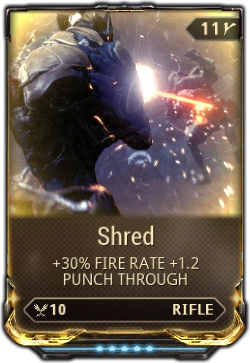 Accelerated Blast can stack with

Flechette to give 150% Fire Rate and 90% Puncture Damage respectively.

Lethal Torrent) as rewards for the weekend event Arid Fear. These were later added to regular Nightmare mode missions as rewards.

Streamlined Form) which were right away available to acquire in their respective nightmare missions.

During the Nightmare Weekend event (August 23rd to 26th, 2013), the 10 original Nightmare mode mods were also rewarded from special Alerts with a mission description of "Nightmare Mod Located".

Nightmare mods are untransmutable. Visually, they do not have a clearly distinguishing mark.

For any Rescue missions, regardless of Planet: