For the photo-booth feature, see Captura.

The location of an enemy VIP has been discovered. Track them down and then capture them. Watch out, as these enemies would rather run from combat than fight. If they see you, they will run towards the nearest extraction pint. Defeat them before they can escape.
Once a target is downed, press X  to capture these targets and teleport them to a waiting holding facility.
—In-Game Description

Capture is a Mission type requiring the player to find a person of interest, incapacitate them before they escape, and capture said target before heading to extraction.

Players must first locate the Capture Target (Grineer Target, Corpus Target or Nullifier Target), who typically spawns in a room used exclusively for the Capture mission type (though the Capture Target may spawn in a "generic" room that is used regardless of mission type). Once the Capture Target spots the player, the Target will immediately start running away to avoid capture, ultimately making his way to a ship or a safehouse. If the Target reaches that location, players will no longer be able to capture him, failing the mission. In order to actually capture the Target, players must attack him until he kneels, remaining still until the player interacts with the downed target, transferring him to a safe location. Players can head to extraction once the Target is successfully captured.

The Capture Target runs faster than most Warframes, is immune to most Warframe abilities, and will have an ability to evade his pursuers (such as Radial Blast or

Smoke Screen). Coupled with incoming enemy fire (who will ignore the target regardless of faction allegiance) and having much more health than the enemies present, players must get close in on the target quickly before they leave the map, where the mission will fail.

Once the target has fallen for 30 seconds, he will enter a bleedout state for the next minute. If players do not complete the capture before then, the target will die and fail the mission.

Capture missions may turn into Exterminate missions after the target has been captured. This is accompanied by Lotus saying "Change of plans, ignore your original objective, leave nothing alive". Exterminate missions of this type appear to have a much lower amount of kills needed to complete than normal.

Corpus Nullifiers and white-suited Corpus Targets (capable of creating a

These white-suited Targets often wield the

Glaxion, which seems to do far more damage to players than normal.

Unlike other mission types, all capture missions outside of the Void pull from the same pool of rewards regardless of level.

Affinity rewards scale with mission level, up to a maximum of 3000 affinity, and are given for capturing the target. 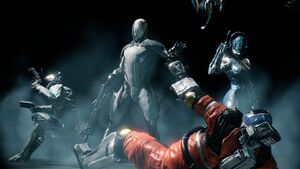 Capture as seen in the lobby (U9) 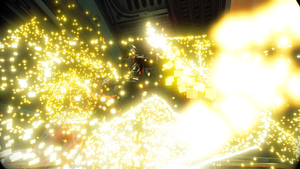 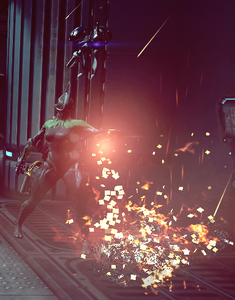 Capture Targets now have a 1 minute Bleedout timer after being downed for 30 seconds, upon which Lotus will now alert you that you’re running out of time to capture the Target. Capture missions had become an unofficial Endless mission with the tactic of leaving the Target squirming on the ground for hours while players dealt with the never-ending horde of enemies. The Bleedout timer has been added as a countermeasure to fix the unintended Endless Capture missions.