190
JavaScript not loaded. Please refresh your browser using Ctrl+F5 on PC or Shift+R on Mac.

Vor Sigil 100.00%
Foolish Tenno, do you realize your Lotus has sent you to die?
—Captain Vor

Captain Vor is the Grineer officer responsible for the players' awakening in the opening moments of WARFRAME. He is one of the few figures in the Origin System that understand ancient Orokin technology, and is capable of utilizing it and merging it with Grineer technology to create offensive weapons such as his trademark

Seer pistol and his armor, powered by a Void Key that he refers to as the "Janus Key", which also grants him a powerful ranged beam attack, impenetrable shielding and the ability to teleport.

Captain Vor can be encountered in three locations currently, making him the most recurring boss in the game aside from the assassins. First appearing at the end of the Vor's Prize quest and thus being the first boss that players must fight, he also serves as the boss of Mercury; he then appears again on Ceres alongside Lieutenant Lech Kril; then appearing later yet again as a Corrupted version of himself within the Void.

Due to the nature of the starchart progression being altered in Update 19.0 (2016-11-11), some of the lore orders listed here may not match the current game's order. This section lists the last known order before the order of the story was retconned.

At some point before the beginning of the game, Vor held the rank Admiral and was tasked by the Twin Queens to hunt down and destroy the Warframe cryopods hidden throughout the system before they could awaken. However, rather than destroying them, Vor would capture the Tenno within, in the hopes of using their power to restore the Grineer's decaying army with a new breed of better, healthier clones. Admiral Vor's failure to comply with their orders drove the Queens to lose their faith in him, demoting Vor to the rank of Captain as a result.

Captain Vor is one of the few people in the setting known to understand Orokin technology and manipulate it to his own benefit, primarily as a means of finding more Orokin artifacts to exploit, as well as capturing and/or killing any newly awakened Tenno he and his forces encounter. This is best demonstrated by the use of his Void Key during combat, as well as his custom-built

Seer pistol, a hybridization of Orokin and Grineer technology.

As with most Grineer, Captain Vor shows contempt towards the Tenno, taunting them that he will take their equipment as trophies. Some of his taunts also suggest he dissects any Tenno he gets his hands on in order to understand the source of their power, much like Alad V does.

Captain Vor used to have an experienced Grineer veteran under his command named Nok, who, after many years of loyal service became too burdened by the degenerative effects of his decaying genetics. Nok was granted leave under Vor's blessing to spend his remaining days as an Executioner in Rathuum punishing Grineer.

Operation Arid Fear was an operation that subsequently follows the event of Operation Sling-Stone, where the Grineer Captain entrusts Alad V to hide their hidden settlement from the eyes of the Tenno. The Tenno's victory in the operation suggests that Vor takes personal responsibility for failing to keep the settlements a secret from the Tenno, though he also blames Alad V for his ill-thought methods of hiding it in the first place. Nevertheless, he decides to stand by the settlement (moved to Grineer Shipyard, Ceres for gameplay reasons) to confront any Tenno that arrive there, bringing Lieutenant Lech Kril along for assistance.

Set sometime before the events of the game, Captain Vor and his Grineer force were raiding an Ostron village for the purpose of excavating Orokin artifacts. After executing most of the Ostrons in the process, a sudden incursion by an

Excalibur foiled the operation, forcing the Grineer to retreat while the Tenno opted to save an Ostron girl named Mitsuki.

Realizing how powerful the Warframe was, Captain Vor opted to deploy the Grineer Ghouls to assist him in apprehending it. His strategy was to exploit the Warframe's prowess in close combat and melee weapons, exposing the Excalibur to the Ghoul's paralytic blood spilling onto him, eventually immobilizing it and leaving him vulnerable to capture.

Confined in a Grineer base, Captain Vor forcefully extracted information from the Excalibur via an Ascaris; learning that the Ostron girl he was protecting, Mitsuki, knew the location of an Orokin Vault. Before he could learn any more information, he was interrupted by the Lotus, encountering her in the Tenno's mindscape and was quickly "forced out" of the Warframe. Though not able to obtain any more intelligence, this still prompted the captain to make his move to capture the Ostron child.

Discovering the Ostron child immediately, whom had taken shelter under the protection of a Solaris United operative, Little Duck, Captain Vor and his force quickly overwhelmed the two with barely any casualties. Things looked promising for the tactician, but they were suddenly ambushed by another Tenno donning the

Mag Warframe, quickly turning the tide of the battle against the Grineer and prompting them to retreat, but not before the Solaris operative shot off Vor's Orokin Key in the middle of the chaos.

Now left without his Orokin trinket, Captain Vor improvised his plan to let Mag and her allies open the Orokin Vault instead, while calling in many Grineer reinforcements to prepare for his third deadly yet desperate assault against the Lotus's force. Carrying the incapacitated Excalibur along with them, the Grineer force quickly discovered the Orokin Vault in question, which was – true to the tactician's prediction – left open by their adversaries.

The vault contained a portal which the army crossed, finding themselves in a time-worn Orokin vessel overgrown with Infested tissue: an Orokin Derelict; they were immediately ambushed by the Infested horde. Things seemed to get more dire as the Grineer's useless attempt to hack an Orokin console instead activated the Medica protocol throughout the ship, causing Neural Sentry drones to float across the vessel, implanting themselves onto the faces of Grineer and Infested alike, corrupting them in the process, forcing the weakened forces to face off against not only the Infested and drones, but also their corrupted former allies.

After making their way into the Medica chamber, Captain Vor and his forces were greeted warmly by the Tenno and her allies. The tide of the battle did not turn well for the Grineer forces as Mitsuki utilized the ship system to stun the majority of the Grineer with powerful electrifying arc, allowing the Tenno forces to escape the ship through the threshold. Captain Vor, in a last ditch attempt, crossed the same threshold and managed to ambush Mag and her allies, but was quickly stopped by the now conscious Excalibur, before being punted back into the derelict, for good. Captain Vor, despite being stranded in the Orokin vessel alone and having to fight for his own life, betrayed one last sinister smile. The fate of Captain Vor is unknown beyond this point.

Captain Vor, bent on controlling the Warframes rather than destroying them, travels to Earth to the location of a newly-discovered cryopod (containing the player's first Warframe). His attempt to capture the Tenno fails, however. They are awakened by the Lotus and manage steal a ship and escape Earth, despite Vor using an Ascaris to begin taking mental control of the Warframe's functions.

Under the Lotus' guidance, and with the assistance of their old ship Cephalon, Ordis, the Tenno rescues the black market arms dealer Darvo from a Grineer gulag. In gratitude, Darvo helps them detach the Ascaris from their Warframe, allowing the Tenno to track down and defeat Vor.

After an indeterminate amount of time, Vor was revived by the Orokin "Janus Key" in his possession, which linked his broken body back together via a swirling mass of energy, becoming Corrupted Vor. In his current, Corrupted state of mind, Vor leads the other Corrupted defenders of the Void against all intruders. He displays a religious reverence for the Void, claiming to know its "true" power and declaring that the Tenno are "trespassers" being led by a "false prophet". It is unknown whether this is a revelation brought about by his revival, or simply brainwashed by the Key or an Orokin Neural Sentry.

In The Rebirth trailer, the newly revived Captain Vor is seen marching his way through Grineer troops to demonstrate the power of his Janus Key, possibly leading his soldiers into the Void and corrupting them in the process.

He ultimately became the guardian of the Sedna branch of the Void, continuously re-confronting any Tenno that dare enters his territory from time to time.

Captain Vor is an aged Grineer who has lost three of his limbs and an eye, of which he makes up with his own unique, brown, heavy suit of armor. Much of the armoring covers the entirety of his body with pipe hoses strewn all over, along with mechanical body parts replacing both of his legs, his right arm and his right eye. He is armed with a Cronus and a Seer at his disposal, along with a special key-shaped socket on his left chest reserved for his Orokin Key, of which he often uses it for multiple purposes. As with all Grineer's gene deterioration, he has wrinkles spread across his face and presumably all over his body; although this could be a factor of his old age as a Commander calls Captain Vor an "old man" in The Call trailer.

Captain Vor tends to fight at ranged distance with his

Seer and Janus Key, making good use of his Teleport and

Cronus to increase the gap between him and the Tenno. Every third of his health he will deploy a Sphere Shield to gain invulnerability while simultaneously summoning Grineer troops as a distraction.

Aside from depleting his shields and health, there is little in the way of strategy to the overall battle; simply damage him, wait out his invulnerability from his Sphere Shield, and repeat until he dies. 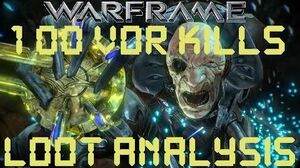 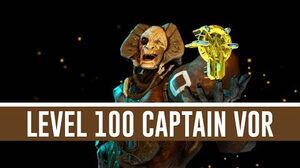