The Deadlock Protocol
Replayable
Void Storms gather in Corpus lanes... could a mysterious vessel somehow be the cause?
—In-game description

Call of the Tempestarii is an optional solo-only quest released in Update 30.0 (2021-04-13), where Corpus captain Vala Glarios seeks out the void vessel called the Tempestarii. Completing this quest rewards the blueprint for

Sevagoth, and if the player has completed The War Within, they will also gain access to the Sisters of Parvos.

Cephalon Cy discovers Corpus convoys exploring Void anomalies in Veil Proxima and decides to bring the Tenno along to investigate. Upon arrival, the Tenno gets intercepted by Vala Glarios and her fleet, followed by the ghost ship the Tempestarii, helmed by Sevagoth's Shadow. Escaping the ambush, the Tenno infiltrates a Corpus ship and hacks into their data vaults to discover the mysterious origins of the ghost ship. With this information, Cephalon Cy releases a distress signal to summon the Tempestarii and establishes communication with the ship. Vala returns to destroy the Tempestarii, but Sevagoth's Shadow fends off the invaders. The Tenno successfully sends Vala's capital ship into the Void and returns the Shadow to its body. In the end scene, Parvos Granum is seen with Vala in the Granum Void.

This quest can be accessed directly from the Codex, after owning a Railjack and completing the The Deadlock Protocol and being Mastery Rank 4.

The player will receive an inbox message from Cephalon Cy, informing the Tenno that the Corpus are mobilizing towards Void Storms and they should investigate in their Railjack.

The Tenno travel to the Veil Proxima to scavenge resources from wrecked ships. During the Void jump, a ghostly Void Railjack passes by the cockpit, which Cy initially dismisses as a visual sensor glitch. After gathering from one spot, several Vorac Basilisks and Gox Scavengers will appear and must be fended off.

After the third scavenge, a Corpus Ship comes into view and its captain, Vala Glarios, introduces herself as a servant under Parvos Granum. Shortly after, the same Void Railjack emerges from the Void Storm, which Vala recognizes. As the Void Railjack is hostile to both Tenno and Corpus and invulnerable to fire, Cy has the Tenno's Railjack evacuate and activates a Void jump, suggesting they find what Vala knows about the Void Railjack.

Automatically transitioning into the Pluto Proxima, the Tenno infiltrates the Corpus Ship in a Spy mission where all three vaults must be hacked. Cy learns the Void Railjack was an Old War rescue ship called the Tempestarii, but disappeared into a Void Storm during a mission. A Somachord fragment can be found above one of the spy vaults.

After regrouping at a Dry Dock, Cy believes that the Tempestarii is searching for its final rescue mission and suggests delivering it a distress signal.

Deep within a Pluto Proxima Void Storm, Cy launches a distress signal to summon the Tempestarii. The Void Railjack turns hostile after Cy responds to it incorrectly, prompting the Tenno to hold out until he can reestablish communications. After Cy successfully appeases the Tempestarii, the Tenno must then board it. A Somachord fragment can be found in the Tempestarii's forge area.

The Tenno meets the Tempestarii's captain,

Sevagoth's Shadow, who gives them the corrupted navigation data of their final rescue mission. The Tenno starts repairing the data via Parazon but Vala appears. She thanks the Tenno for subduing the Tempestarii before knocking them out.

Exalted Shadow in a void space against waves of Corpus enemies, and will instantly revive on death. During this, they learn that Vala was the sole survivor of a Tempestarii attack, dreaming that the fragments of her dead crew were singing, thus seeking revenge against the Void Railjack. After the song ends the Tenno awakens, protected by Sevagoth from Corpus boarders, as the Tempestarii is seized by a beam generator.

The Tenno must board the Corpus vessel to destroy the beam generator. After hacking a console, they must fend off Jamming Drones (Taro Secura Ospreys) and an Optio. Once all are defeated and the hacking is complete, they must interface with a final console to destroy the station.

The Tenno must then return to the Tempestarii and repel Corpus fighters until it readies an Ordnance. The countermeasures tears apart Vala's ship. Vala charges her sisters with the duty of avenging her.

Cy directs the Tenno to finish the Tempestarii's final mission, triggering a jump into the Void to retrieve a lifepod. This lifepod contains the corpse of Sevagoth, who created his Shadow to continue piloting the Tempestarii and search for his body. Now reunited, Sevagoth is given a ship burial as his body is launched back into the Void. Meanwhile, Vala emerges in the Granum Void as Parvos Granum appears before her, extending his golden hand.

The player will receive Sevagoth's blueprint. They will also receive an inbox message containing the Tempestarii Railjack Skin, Sevagoth's Prex and Sevagoth Statuette Orbiter Decorations, and The Cold Below Captura scene. Additionally, if the player has completed The War Within, they will begin to encounter Candidates upon qualifying for minimum rewards in the Granum Void, who can be mercied to generate their own Sisters of Parvos. 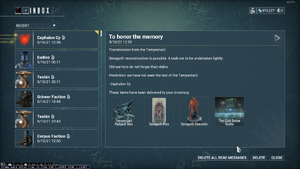