When modding anything in WARFRAME, the order in which bonuses are applied follows a pattern. With the exception of mods that provide elemental damage bonuses, the order in which mods are installed does not matter; the resultant stats will always be the same regardless of the mod configuration. The same goes for temporary or conditional buffs and debuffs from abilities, mods, Arcane Enhancements, and enemies.

In most cases in WARFRAME, percent bonuses to stats (not to be confused with flat percentage points) can also be represented as stat multipliers using the following conversion:

For simplicity, calculations in this article (and throughout the wiki) will represent percent bonuses as decimals and will use 1 + Net Percent Bonus as a decimal expression instead.

All sources that add a percent bonus of the same type will typically have their bonuses added together. This commonly referred to as additive stacking (internally represented as ADD or STACKING_MULTIPLY operation types). For example, if a primary weapon has

This is true of all percent bonuses, not just damage. For example, combining

Sources that grant flat value or percentage point increases are typically applied after all other bonuses are applied (internally represented as ADD or SET operation types). For example, say a melee weapon with 20% critical chance and

Note that flat bonuses are additive with each other. Using the previous example, if the player's Adarza Kavat's

Vex Armor additively stacking with base damage mods). This is commonly referred to as multiplicative stacking (internally represented as the MULTIPLY operation type). For example, a primary weapon with

Examples of sources of damage bonuses/multipliers that will multiplicatively stack with each other:

In rare instances, some bonuses are applied to itself multiplicatively and is multiplicative with all other bonuses. This is often referred to as exponential stacking. For example,

Arca Titron has a unique mechanic where each successive kill adds a charge that multiplies the next slam radial damage bonus by 2 using the following equation:

Players may refer to additive stacking having "diminishing returns" (despite being linear increases; a more accurate term would be "opportunity cost"), meaning that at higher percent bonuses, the additional value gained per additional percent bonuses is less, relatively speaking. For instance, if one were to equip a secondary that dealt 100 base damage:

Because of this, sometimes it is better to not equip mods that provide relatively lower additive bonuses due to opportunity cost. That mod slot is better reserved for bonuses that multiplicatively stack with other bonuses. 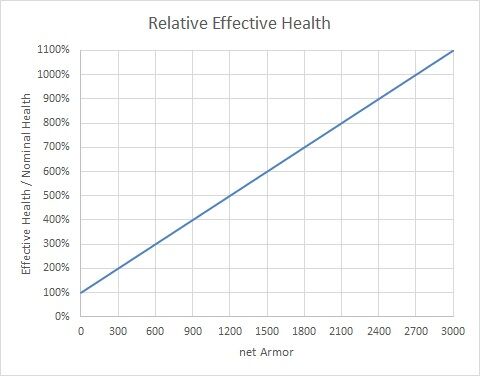 Although most Armor bonuses are percentage based (thus having "diminishing returns" strictly speaking on relative armor point increases) and that the relative increase of Damage Reduction percentage is smaller at higher armor values (e.g. the difference between 100 and 200 armor is 15% while the difference between 400 and 500 is 5.3571%), the actual number of effective health points (EHP) gained per additional point of armor does not have diminishing returns and remains constant (linear change). Every 300 armor points added will provide an additional 100% base health. This means that at higher armor values, the difference between EHP and nominal health is greater as seen in the above graph.

However, for most practical purposes in modding, effective health itself will have "diminishing returns" relatively speaking.

Note that multiplicative stacking does not have diminishing returns. For example, for a secondary that deals 100 base damage:

Like multiplicative stacking, exponential stacking also has no diminishing returns since the next stat bonus always give the same relative additional value gained per additional percent bonuses as the previous bonus. For instance, with an unmodded

Arca Titron with a base radial damage of

To summarize, the order in which bonuses for the same fundamental stat applies as follows:

Example equation demonstrating the above order.

Mods primarily increase damage in one of four different ways:

Once damage is calculated, it may be affected by Critical Hit mechanics or modified based on the opponent's armor or sources of damage reduction. For detailed calculations of how various damage types affect different types of enemies, see the Damage page.

For weapons that fire multiple projectiles like shotguns or

Cernos Prime, the damage calculated is the damage dealt by each projectile. In other words, if the weapon only fires one projectile at a time, all of the damage is the base damage per projectile.

If the weapon has multishot from a mod like

Split Chamber, it will have a percent chance to fire additional projectiles per shot, each of which will deal the full modded damage as if one projectile was shot. The arsenal will display multishot bonuses as percent increases in total damage when in fact this is not true in reality. The total damage stat shown in the arsenal actually reflects the average damage dealt per shot in this case. For example, a

For weapons that only fire a single projectile,

Split Chamber's 90% multishot will cause each shot to randomly have a 90% chance to fire two projectiles instead of one. Since

Glaxion, multishot adds a chance to increase damage on a tick. For example, adding

Split Chamber to a

Glaxion will give a 90% chance for a damage tick to double as if two projectiles were shot.

Physical damage mods apply only to base damage of the same type. For example, at max rank

Karak does 29 damage split into 13

Electricity damage when unmodded, so

Fanged Fusillade will provide no

Elemental damage mods apply to all damage done by a weapon. For example, a max rank

Each two different elemental mods will be added up into a secondary element, with has different damage type modifiers against certain enemy health, shields, and armor classes. For combined elements, the slots are ordered from left to right, top row then bottom row, with any inherent elemental damage (from the weapon) added last.

For example, if both

Cold damage) are equipped on an

Amprex, they will combine to add

Blast damage to the weapon's base

Electricity damage. If only Hellfire is used, it will combine with the Amprex's base

If multiple mods of the same element are added, only the first is used when making combinations. For example, if Hellfire, Cryo Rounds, and

Thermite Rounds are added to an

Amprex, no matter what the order is the weapon will deal

Electricity damage since the

Heat element has already combined with

Cold, so the second

Both physical and elemental damage are combined in the same step and are based only on the weapon's base damage and any mods that effect base damage.

The damage numbers displayed in the in-game arsenal calculates total weapon damage as such:

For melee weapons, remove multishot from the equation

Theoretical total inflicted damage against an enemy can be calculated as such (ignoring quantization for simplification):

“It's taking longer than I calculated.”
This page is actively being worked on and may not be completely correct. Please assist in making this page accurate.
Burst-fire and mag-burst attacks (not simultaneous burst like

When comparing the performance of non-melee weapons, it may be useful to calculate their theoretical damage per second (DPS) (without accounting for status effects) using the following formulas:

The average damage dealt on a single button input if all projectiles hit an enemy.

The lower the Fire Rate, the more delay between charge shots. If attack is not a charge trigger type (charge time is 0), then effective fire rate equals modded fire rate.

Not all weapons consume one ammo per shot; this is to account for cases such as Continuous Weapons

Vectis Prime specifically, one (1) should be subtracted from the denominator to account for their lack of a reload delay.

When comparing the performance of melee weapons, it may be useful to calculate their theoretical damage per second (DPS) (without accounting for status effects) using the following formulas:

The average damage dealt on the first enemy hit by melee attack, not accounting Follow Through
See individual stance pages for average combo damage multipliers or go to Stance#Comparison

Without accounting multipliers of specific DoT.

Multiply each DoT with the respective damage distribution (i.e. damage type / total damage) and add them together

Accounting for critical hits, non-crits, and status chance for an average of total DoT averages.

Lifetime damage is a derived damage stat that is based on the total amount of damage that a weapon can deal before it depletes its ammo reserve. Melee weapons, Battery Weapons or rechargable weapons, and Exalted Weapons (assuming Energy is always restored) will deal infinite damage over their in-game use since they are always available and are not reliant on ammo pickups or Squad Ammo Restores.

The average total damage dealt by a weapon without switching weapons or replenishing ammo.