Bronco Prime
CODEX
The Bronco is a small-scale shotgun that can be wielded with one hand. Only effective at close range, it has a limited clip size.

The Bronco functions like a cross between a shotgun and handgun, that comes in a handy package to complement long range primary weapons.

The Bronco's blueprint can be purchased from the Market. 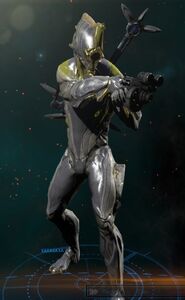