A Bounty is a series of missions given out by a bounty board NPC (Konzu in Cetus, Eudico in Fortuna and Mother in the Necralisk) to undertake tasks in Landscapes (Plains of Eidolon, Orb Vallis and Cambion Drift respectively), which give various rewards upon completion, including the town's Standing.

The Bounty Board will periodically generate a list of bounties, and players are able to select which bounty they will perform. Players will be able to see the bounty's expected enemy level, Standing reward, and a list of possible completion rewards before confirming their selection. Once selected, a marker will appear on the city gate, indicating the location of the Bounty's first objective.

Bounties are multi-stage missions strung together by a theme/goal, where players have to accomplish a sequence of three to five objectives (Stages) randomly located in the landscapes. To complete the Bounty, players must accomplish their current Bounty stage successfully, after which the next stage is then revealed on the map. The individual missions assigned to each Bounty are randomized and include Supply Sabotage, Cache Recovery, Liberation, and others.

Bounties with higher enemy-level will require a minimum Mastery Rank to select. These can still be played, when an eligible squad member selects one.

The bounties provided in the bounty board are tiered by difficulty, with the top-left bounty being the easiest, and the bottom-right one the hardest. Consequently, the rewards offered are different between bounties, with higher-level bounties rewarding better and more exotic items. As rewards are given at the end of each stage, higher-level bounties also give more rewards than the shorter low-level bounties.

Each level bracket has a set of three reward pools, which are changed every Bounty cycle. The active pool determines what rewards are available. Each pool is in turn broken into several rarities, which will affect the items' drop rate or their chance of actually appearing as a reward. The levels are bronze for Common, silver for Uncommon, and gold for Rare. Later Stages in the Bounty will make these rarer rewards available, and so these Stages are like the later reward Rotations in Endless missions. The last stage in a bounty will only award Uncommon or Rare rewards.

Completing each Bounty stage will reward the player with one of the possible rewards for that Bounty, as well as a small amount of

‍ Standing (with exception of Profit-Taker Heist bounties). The Bounties can be repeated for the item and Standing rewards. The player will not forfeit the rewards gained during a previous Bounty stage even if they fail to complete the next stage.

Before a Tenno can access Cetus bounties, consisting of Field Bounties and Ghoul Purge Bounties, they must first prove themselves to Konzu by completing an introductory bounty (Level: 3-5).

Field Bounties are accessible by default from Konzu or from Radio Consoles located throughout the Plains at any time of the day. These bounties refresh every 2½ hours (a full day/night cycle in the Plains) and will offer different rewards and mission theme every time.

Each tier has a Mastery Rank lock, as follows:

Ghoul Purge is a recurring world state event that occurs once every few weeks, located at Plains of Eidolon, Earth. During the event, the plains will be populated by an increased amount of Ghouls and will remain so until the Ghoul population has been exterminated.

Eidolon Hunt bounties are only accessible when the Plains of Eidolon has entered nighttime and the Tenno possesses an Amp. These bounties do not provide any rewards, other than Ostron standing, and are only used for matchmaking purposes with fellow Tenno of similar goals. There is no difference in gameplay with or without these bounties.

There are two bounties. The first is only the Eidolon Teralyst for 1,000

Before a Tenno can access Fortuna bounties, they must first prove themselves to Eudico by completing the Vox Solaris quest.

Field Bounties are accessible by default from Eudico or from Solaris United Agents outside Fortuna. These bounties refresh every 2½ hours.

Profit-Taker Bounties is a Heist that can only be accessed if the player had first reached the maximum possible standing rank in the Solaris United. To pick these bounties, the players will need to visit the backroom inside Fortuna behind Eudico, which is accessible by visiting Fortuna and then using Fast Travel from the Main Menu: ESC  > FAST TRAVEL  > LITTLE DUCK . These bounties consist of four phases, ultimately leading to the confrontation with the Profit-Taker Orb:

Exploiter Bounty is a Heist that only consists of one matchmaking Bounty, without specific reward other than 1,000

‍1,000 Solaris United standing, and leads players directly to the confrontation with the Exploiter Orb. However, in order to fight the Exploiter Orb, one Diluted Thermia is required, which is obtained from the bi-weekly Thermia Fractures event.

Bounties in the Orb Vallis have their own mission types, which are either unique or variants of traditional missions. The following are the mission types available:

Before a Tenno can access Necralisk bounties, they must first prove themselves to Mother by completing the Heart of Deimos quest.

Field Bounties are accessible by default from Mother inside and outside the Necralisk. These bounties refresh every 2½ hours.

In addition to the standard 3-, 4-, and 5-stage bounties, Mother also has endless bounties. These contain 3 normal bounty stages per rewards cycle, with both enemy level and token rewards increasing every cycle.

The Isolation Vault is a bounty to investigate vaults deep within the caves of Deimos. Up to three vaults can be investigated by reaccepting the bounty from Mother in Cambion Drift, and completing more vaults within the same mission yield greater rewards. This bounty is limitless, meaning its rewards do not periodically change.

Bounties in the Cambion Drift have their own mission types, which are either unique to the Drift or variants of traditional missions. The following are the mission types available: 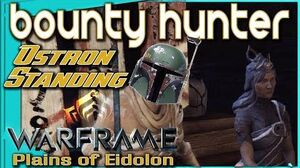 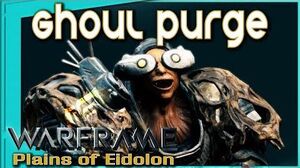 The Entrati are prepared to give a variety of new Bounty types to worthy Tenno - play them to earn new Rewards (including Xaku’s Components)!

Try out the new Endless Bounty to dig up Deimos rewards to your heart's content! Simply look for (ENDLESS) in the Bounty Description Title!
Isolation Vaults await you as a part of these Bounties, tread with caution!

With the launch of Orb Vallis, we added Bounty Bonuses as a way to reward players who went above and beyond to complete their missions. It’s about time that new system was extended to Plains Bounties as well!

All normal Plains of Eidolon Bounties have Bonus Objectives, meaning you will receive extra rewards for performing well:

We have made ways to the way Bounties reward you! This new system is a take on the 'AABC' rotation system we have in endless missions, but applied to Bounties using the Common, Uncommon, and Rare rewards.

Re-balanced the quantities of some of the rewards. Right now this only applies to select items. Plains of Eidolon specific reward quantities are untouched (i.e it could be possible to get 25 x Breath of the Eidolon in a single 5 Stage Bounty or 6 Cetus Wisps in a 5 Stage Bounty).

Retrieved from "https://warframe.fandom.com/wiki/Bounty?oldid=2183518"
Community content is available under CC-BY-SA unless otherwise noted.