“It's taking longer than I calculated.”
This page is actively being worked on and may not be completely correct. Please assist in making this page accurate.
Health class of shield? Similar to Rhino's Iron Skin?

Update 29.5 (2020-11-19)
CODEX
This fearsome Necramech, fashioned in honor of the Entrati matriarch, is a robust front-line fighter. Favoring armor and health over shield strength, Bonewidow can grab and hurl enemies, deploy a heavy shield for personal defense, and cleave through opposing ranks with a massive warblade.
You tried that Bonewidow yet? One of the most fearsome tools I've ever constructed. Cold, cutting, ruthlessly efficient. Based her on my wife.
—Father

The Bonewidow is a heavily armored, melee-oriented Necramech, armed with its signature tower shield and exalted heavy sword to engage enemies in close quarters combat.

Component blueprints for the Bonewidow are available for 3,500 Standing

3,500 from the Necraloid Syndicate at Rank 2 - Clearance: Modus, while the main Bonewidow blueprint is available for 10,000 Standing

10,000 at Rank 3 Clearance - Odima rank. When levelling the Syndicate, one Bonewidow blueprint is offered for free.

Crafting the components additionally requires Rank 1 - Outworlder with Solaris United, Rank 3 - Trusted with the Ostrons, and Rank 2 - Acquaintance with the Entrati in order to acquire Goblite Tears, Star Crimzian, Thaumic Distillate, Adramal Alloy, and Devolved Namalon required in its construction. 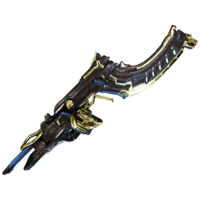 Necramechs have started to play a vital role within the System - from being part of the Railjack experience, to a great tool in our Open Worlds. While their firepower provides an advantage, the time and resource investment required to obtain one has shown to be a deterrent to newer players. As The New War approaches, we aim to alleviate that initial friction and provide an easier path of obtainment.

Enemy Necramechs now have a 50% chance to drop a Necramech part across the board, evenly distributed. The battle required to defeat an enemy Necramech is not easy nor quick. This increased chance of getting a Necramech part helps to reduce the time investment needed in order to gather the mandatory parts to build your first Necramech.

On today’s menu we have a hearty serving of Bonewidow changes & fixes. Let’s breakdown the nutritional facts here: Arquebex is a very high damage weapon for Voidrig, as it makes sense for his damage output kit. Bonewidow is our Melee Necramech more focused on survivability and endurance. Exalted Ironbride is not going to match 1:1 with Arquebex, but that doesn’t mean Ironbride (or the rest of her kit) should be overshadowed. The below aim to address common Community feedback to provide Bonewidow that extra dash of spice.

Bonewidow has had a bit of an iterative release - there’s all the changes we made post-test cluster weekend, some pretty nasty bug fixes, and now, another big round of changes. Feedback regarding Bonewidow’s abilities have brought forth the upcoming Ability overhaul changes you see below! We appreciate all the suggestions on our second Necramech thus far, take a look at the new changes:

An important raised issue with Bonewidow is being unable to regenerate Health, as Bonewidow is geared towards the more “tankier” focused Necramech in comparison to Voidrig. This change to Meathook aims to tackle that head on.

Firing Line needs to work as a better set up to let Exalted Ironbride shred enemies, and we’ve ensured it’s casting leads to better set up opportunities with these changes:

The Shield Bash has been expanded to work whenever you have a Shield equipped, not just when you have a Sword and Shield!