For the Berserker Warframe, see Valkyr.

Berserker Fury is a mod that temporarily increases a melee weapon's attack speed for 10 to 20 seconds on killing an enemy, stacking up to two times. 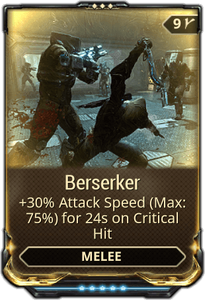 Berserker Fury's effects prior to Update 30.5 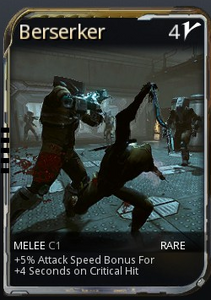 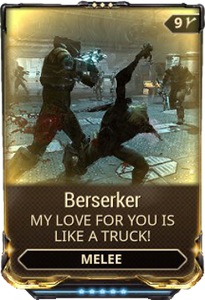 Attack Speed increases for Melee are part of what makes it so dominant. This is especially true when the conditions to reach animation-breaking Attack Speed are as simple as current Berserker: ‘on Critical Hit’. Infinite Attack-Speed Uptime is possible with a single Mod, and the result is animation noise with no distinction between hits, coupled with massive Damage output.

We still want to support the ability to increase your Melee Attack Speed and Damage Output, just not to the levels you currently can.

This is important because:
- It decouples it from Critical Chance.
- Adds a more defined ramp up using ‘On Kill’ instead of On Crit (which frequently meant 0 to ‘Max’ in one swing hitting 3 enemies).
- Renamed to Berserker Fury to communicate that it can no longer be equipped with Fury / Primed Fury.