Bailiffs are heavily armored Grineer melee units introduced in the Project Undermine Tactical Alert. They are rare but dangerous units, capable of smashing through crowds and soaking up Corpus fire. Throughout the Tactical Alert, they are considered to be the Grineer answer to the Corpus Isolator Bursa. The Bailiff wields a custom-colored Jat Kittag

Jat Kittag, which they use during battle, and wears heavier frontal armor that bears resemblance to a hockey goalie.

The base variant can be rarely found in the Kuva Fortress. 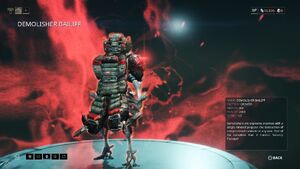 Demolisher Bailiff, as seen on The Codex