The Ayatan Sculptures are perpetually in motion, monuments of Orokin Continuity... immortality.
—Teshin
Folklore has it these Ayatans used to hold memories. Nowadays, some Ostrons survive peddling Old War trinkets like this, harvested from the Tower.
—Nora Night
Whippings. Massacres. Executions. All their favorite memories. That's what the Orokin used those pretty Ayatans for. Channeling Aya, the essence of memory. I just love watching Maroo melt them down. Erasing the Orokin, piece by piece. Some things deserve to be forgotten. Forever.
—Varzia

Ayatan Treasures are ancient Orokin artifacts powered by Endo that can be discovered across the system. There are two types available: Sculptures, and smaller Stars which can be inserted into the larger Sculptures to increase their value. These can be traded to Maroo at her Bazaar for varying amounts of Endo, or placed within the Orbiter as decorations.

Acquired by purchase from vendors/rewards:

An Ayatan Star is a small treasure that can be inserted into Ayatan Sculptures to greatly increase their Endo value when traded in. Once slotted, a Star cannot be removed. They come in two colors: the more common cyan, and the rarer amber. Stars can also be traded in by themselves for a small Endo payout. Sculptures have 3 to 4 slots to insert Stars in, and each slot only accepts a specific color. Inserting Stars will also cause the Sculpture to visually animate, with more Stars improving the Sculpture's range of movement.

At Mastery Rank 10, players gain the ability to auto-install Stars into their Sculptures.

Additionally, Sculptures and Stars can be traded between players.

In the Mods section of the Orbiter, selecting "Ayatan Sculptures" will allow the player to examine Sculptures and attach Stars. Stars can be inserted into a Sculpture by selecting the desired Sculpture, then hovering the cursor over a socket and clicking on it. The Sculpture must be in the player's inventory for it to be selected; if displayed as a decoration, the Sculpture will not appear in the Mods screen. Each Sculpture can have 3 to 5 sockets available for slotting, with each slot requiring a particular type of Ayatan Star depending on the type of Sculpture.

Sculptures can be sold on Mars at Maroo's Bazaar for Endo.

This table can indicate that the Anasa sculpture will yield the least amount of Endo gain for the number of Amber stars put into it at full value.

Completing Stolen Dreams quest will unlock "Weekly Ayatan Treasure Hunt" Alert. Every Monday at 00:00 UTC, players should get this mission added to alerts section of the world state window that can be clicked to visit Maroo in the Maroo's Bazaar Relay on Mars to accept a mission in the Void or Orokin Derelict. Players are required to find a treasure room, which is a large special room filled with traps and obstacles that are activated upon players stepping on a pressure plate at the room's entrance. Once the traps have been activated, players only have a limited amount of time in which they must reach the final door at the very end of the room. Failing to reach said door before it closes completely will result in mission failure, though players can repeat the mission to try again if they fail.

If players successfully reach the last room before it closes, they will encounter a pedestal with an Ayatan Sculpture, the collection of which will complete the objective. Note that a player who has already acquired a Sculpture from their weekly mission will not receive any additional Sculptures should they join someone else's mission. 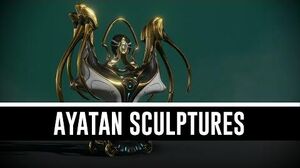 Ayatan Sculptures & All You Need To Know (Warframe) 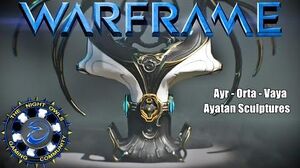 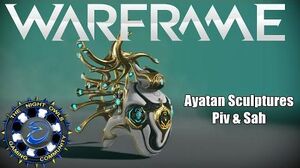