Vor's Prize
Replayable
The Tenno: monuments of an ancient warrior caste. For generations you've slept, with no call to awake you. Until now.
—In-game description

Awakening is the introduction quest to WARFRAME, designed to allow players to familiarize themselves with the basics of Warframe control and combat. It was introduced with Update 29.0 (2020-08-25). Players are given a choice between various starting Warframes:

Volt, along with a small selection of weapons.

The intro, narrated by the Lotus, tells the tale of the Tenno. They were once an ancient warrior caste who controlled the Warframes and brought ruin to the Orokin Empire, before abruptly leaving. However, with the rise of the Grineer Empire, seeds from the ruins of The Old War that now swallow colonies whole, the Tenno begin to awaken.

The cinematic opens with a human girl, awakening underwater. Gasping for air, she surfaces, only to find the Grineer burning down the forests of Earth.

Grineer! Seeds from the ruins of the Old War. Swallowing colonies whole.
—Lotus

The girl flees, discovering ruins of an ancient temple where three Warframes are kneeling:

The girl approaches Excalibur and offers a Lotus flower in front of him. The scene cuts to the past, showing Excalibur petting his Kubrow as they watch a Bolkor dropship land in a Grineer camp. It then shows Excalibur sliding and performing a Stealth Finisher using his

Nikana on a guard; the other guard turns and spots him, but is then attacked by the Kubrow. In the camp, the Bolkor is unloading supplies, and Excalibur drops in the middle and attacks with his Skana and

Kunai. This does not go unnoticed by the rest of the camp, and Excalibur and his Kubrow fight their way through. Excalibur runs along the cliff wall and wields his

Exalted Blade in mid-air, slamming down into the middle of the field and wiping out his enemies. His Kubrow approaches, dropping one of his Kunai next to him.

The girl steps back and places a Lotus flower in front of Mag. The scene then shows Mag flying in her Elytron Archwing before being shot down, under heavy fire from ground troops. Using her

Magnetize as she falls, she stops the bullets in their tracks before throwing them back, the resulting explosion reflected in the visor of her helmet. In the present, the girl wipes the dirt away from Mag's visor.

The girl places her last Lotus flower for Volt. The speedy Warframe is shown using

Shock, while Excalibur fights off his attackers with his Skana and Exalted Blade. Volt is then shown electrocuting his enemies, while Mag telekinetically pulls several Dax and

Crushes them. The Grineer and Dax, clearly outmatched by the Warframes, begin to flee in their Bolkor and Firbolg ships, but Mag

Pulls some of its troops out who are then cut down by Excalibur. He shoots an arrow from his

Paris at one of the Bolkor's engines, causing it to crash into the other ships. The trio enter the temple that is shown in present day, as the battlefield lingers with the corpses of their enemies and the sounds of retreating ships. The trio bow before particles escape from their bodies and they collapse on their knees, now inactive.

Together, they fought back. Bringing an end to an empire. Then, they left. Forgotten. Like a dream...
—Lotus

Back in the present, the Grineer soldiers have reached the temple. The girl drops her hood and stares at the Warframes, before mysteriously vanishing in the same particles that left the Warframes. Storm clouds suddenly appear in the sky, putting the Grineer on alert, as lightning strikes the trio of Warframes. The scene ends with a close-up of Mag's fist, now reawakened and clenching.

Wake up, Tenno. Wake up.
—Lotus

For countless centuries, the Tenno have been dormant, but with the Grineer Empire on the rise, the Lotus begins tracking down and awakening the Tenno. Unfortunately for the Lotus, Captain Vor has been one step ahead of her so far and has been killing off the Tenno as they awaken, before they are strong enough to stop him. His latest find takes him to Earth, near an Ostron village, where he finds a dormant Tenno just as the Lotus reawakens them.

This time, however, he has a different plan—to capture said Tenno. He attaches an Ascaris device to the Warframe, ordering his soldiers to spare it; he intends to use the Ascaris to control the Tenno, and take it to the Twin Queens as his prize. Presumably the first of many or a proof of concept, Vor would then seek to capture more Tenno; once armed with loyal Tenno soldiers, the Grineer Empire would become unstoppable.

The player must evade Vor and his soldiers, arm themselves, restore a ship to functioning order with the help of ship Cephalon Ordis, and ultimately confront Vor to put a stop to his plans.

After the cinematic intro, the player is prompted to choose their starter Warframe:

The chosen Warframe awakes in the midst of the crowd of Grineer. They are approached by Captain Vor, who intends to capture the Warframe by planting an Ascaris device on them before leaving. The Lotus cannot allow the Warframe to be captured by Vor, as losing them is bad enough already. She surges the Warframe's systems remotely, allowing the Tenno to fight back against the soldiers nearby using their innate powers:

With the immediate threat dispatched, the Tenno must now find weapons and escape. This level plays out as a tutorial, with weak enemies and gradual progression through gameplay elements continuing into jumping, melee weapons, double jumping, crouching, sliding, secondary weapons, wall dashing, bullet jumping, primary weapons, aim gliding, and finally hacking and timed defense. Only one of each type of weapon can be acquired, and the weapons of choice provided in this mission are:

Upon arrival at the checkpoint, Vor uses his Janus Key to destroy the first extraction craft before the Tenno can escape. After fighting back and depleting Vor's shields, he expresses great interest in the Tenno before leaving. The Tenno soon finds their old ship, an Orokin-Era Liset, impounded by the Grineer. Ordis, its onboard AI (or "Cephalon"), originally mistakes the Tenno (referred to as "the Operator") for a Grineer soldier, but quickly comes around when it realizes their true identity, and begins charging the ship's engines. The Tenno must hold out against Grineer soldiers for a couple of minutes whilst the drives charge and then escapes.

Despite the Tenno's escape, Vor nonetheless declares that he has marked them. 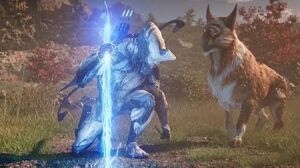