Attack Speed is a statistic that modifies how fast a melee's attack animation plays. True attack speed, the rate at which melee weapons attack, is derived from three attributes:

Cronus of the sword type) each have their own base attack speed modifier which alters the rate of the attack animation. An Attack Speed of 1.0 runs its attacks at default speed. An Attack Speed of 1.2 executes 20% faster, while a speed of 0.8 runs 20% slower. Attack Speed is then further increased (or decreased) by Attack Speed mods and ability buffs, giving us the following basic equation:

Where Base Attack Animation Length is based on the time it takes to complete an attack at Attack Speed of 1.0

Note that certain effects can further change Attack Speed in special ways. The

Recall that attack animations vary between weapon types. Despite the

Karyst (Dagger) both having listed speeds of 0.8, the Karyst's actual speed is faster than the Fragor's due to daggers having a faster attack animation.

Changes in Attack Speed apply to finishers, as well as the animation of heavy attacks but not the actual wind up time. Weapons with ranged charge mechanics such as the

Redeemer are not affected by Attack Speed and uses Heavy Attack Wind-Up Speed bonuses instead.

All base weapon Attack Speeds are in fractions of X / 60. This means despite Attack Speed values listed in the UI, the true values have longer repeating decimals as they are represented as floating point integers. 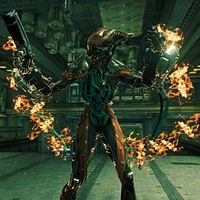 Eternal War is a Warframe Augment Mod for

Warcry's duration for each melee kill.