None
CODEX
Freeze targets in their tracks with this sentinel mounted ice-beam.

The Artax is the default weapon of the Taxon Sentinel, which fires a beam that deals

The Artax is automatically acquired upon claiming the Taxon from the Foundry. Note that this weapon also takes up one Sentinel inventory slot. 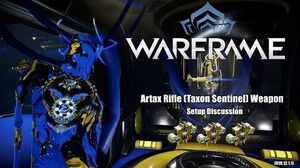