Armor is an attribute that reduces damage taken to health, but not shields. Not all enemies possess armor: Warframes, most bosses, and all Grineer do, but normal Corpus and Infested enemies do not have any. For your Warframe, its armor value is listed in the Arsenal. Armored enemies have their base armor values listed in the Codex but this value increases when they spawn with higher levels. Enemies with more than zero armor have their health bars displayed yellow instead of red; it is possible to strip away armor value through certain abilities or damage procs, turning those enemies' health bars back to red.

In the Damage 2.0 system, health bars always have a health type (flesh, cloned flesh, etc.) which decrease or increase incoming damage depending on damage type (

Slash, etc.); armored entities have an additional type on their health called their armor type (either ferrite or alloy) that further decreases or increases incoming damage. This additional type is removed if the armor is stripped.

When damage is inflicted to an armored target, there are two related calculations made.

There are two types of armor, Ferrite and Alloy. Both are strong against

Slash damage and weak against

Puncture. The main difference is in the elemental weaknesses, which are completely different. Ferrite armor is relatively common with low- and mid-level enemies such as Lancers and Troopers, and has generally weaker resistances than the more advanced Alloy Armor, which is used by Bombards, Napalm, and other bosses. Ferrite Armor is the armor type of Tenno.

Damage type modifiers inherently affect armor's effectiveness. They are given by the following equation:

The damage reduction from armor is as follows:

Effective health is the concept that each single point of health you have actually absorbs more than one point of damage, so you effectively have more hit points than indicated. Therefore, there are two ways that armor functionality can be imagined: either as a reduction to damage, or as an increase of effective health and incoming heals. An alternative way to think of armor transforms the above equation to the following:

The reason it is so important to understand effective health is because it allows you to compare the benefit armor provides to your survivability compared to the benefit that health provides, and it shows you that each additional point of armor increases your time to live by the same amount. While it is common for people to remark that "each point of armor gives you less damage reduction than the previous point", it is not an accurate sentiment—each point of armor confers linear, not diminishing, returns.

Steel Fiber and Armored Agility increase armor value when equipped. As a percentage modifier, Warframes with higher base armor values have a higher benefit from it. Like with most other stats, armor gains from mods stack additively together before being multiplied with the Warframe's base armor:

Neglecting damage type modifiers, the relative increase in effective health from this mod is exactly proportional to the armor increase:

Steel Fiber exists as a mod for sentinels too, while Kubrows can increase armor via Link Armor, as well as via the Kavasa Prime Collar. Link Armor increases their armor by a percentage of the Warframe's total armor, which means that equipping Steel Fiber or Armored Agility on a Warframe directly increases the armor of its Kubrow companion; the Kavasa Prime Collar gives a +100 armor bonus.

Valkyr's Warcry (2 ) increases the armor of all friendly units within range by 50%, or up to 142% with maximized Power Strength. This bonus is calculated additively with other base armor multipliers, such as Steel Fiber. A Valkyr with a max rank Steel Fiber and unmodified Power Strength increases her armor according to the following equation:

Oberon's 2  is Hallowed Ground, which places down a zone in which, among various other effects, the armor of Warframes is increased. This ability at maximum rank awards a 20% bonus to armor, which can be increased by Power Strength to a 58.6% bonus. This bonus is calculated additively with other base armor multipliers, such as Steel Fiber. An Oberon with a max rank Steel Fiber and unmodified Power Strength standing on Hallowed Ground has armor equaling:

As shields are depleted while Vex Armor is active, Chroma's armor is increased by 350%. This is a total of 1250 before considering the effect of mods.

Oberon's Reckoning (4 ) can be modified with the Hallowed Reckoning ability augment, which increases armor by a fixed value of 250 at max rank. Because this is a fixed value and not a percentage, it provides a greater protection to frames with minimal armor.

Rhino's Rhino Charge (1 ) can be modified with the Ironclad Charge ability augment, which increases his armor by 50%, or 142% with maximized Power Strength, for each enemy hit. This bonus is calculated multiplicatively with other armor modifiers, such as Steel Fiber. A Rhino with a max rank Steel Fiber and unmodified Power Strength that has charged through 5 enemies increases the armor according to the following equation:

Unlike health and shield, a Warframe's armor doesn't change as it advances from Rank 0 to Rank 30. Warframe armor is Ferrite and their health class is Flesh. Their armor also never permanently depletes as there are no such effects that remove Warframe armor.

While there is no such thing as a general effective health value, since effective health depends on the damage type the health is subjected to, a reasonable benchmark to compare the durability of Warframes is their effective health against equally distributed physical damage, i.e. equal portions of Impact, Puncture and Slash, since the vast majority of enemy damage against players is comprised of these types. Inserting these assumptions into the previous formula, we get:

As a meaningful PvE benchmark. For actual values, see the figure below.

Enemy armor values are displayed under the codex and infobox, but scale to the enemy's level. Generally, only Grineer and boss enemies have armor, while the Corpus and Infested factions do not have any. When the enemy health bars is yellow, armor is in effect and damage will be reduced and cause it to flicker red.

As mentioned before, this formula causes high level Grineer (lets say up from level 50) to be very hard to kill, as you can see in the example of a level 108 Heavy Gunner:

The resulting damage received by the Heavy Gunner is dramatically reduced to ~3.45% of original damage.

There are several effects which reduce enemy armor. If a target's armor is reduced to 0, it loses its armor type. As such,

Corrosive damage inflicts significantly more damage to a weakly Ferrite-armored enemy than against one whose armor has ultimately been nullified, since apart from the armor mitigation, the +75% damage bonus is lost.

Corrosive status effects remove 25% of a target's current armor amount, permanently (except in Duels and Conclave, where it only lasts 8 seconds against other Tenno). As a result, each successive proc on the target removes less armor than the previous hit. Even though the armor value should theoretically never hit 0 like this, it does get removed when armor is reduced to below 1, due to rounding.

Corrosive Projection is an aura mod of

polarity that persistently reduces the armor of all enemies in the mission by 30%. If multiple cell members equip Corrosive Projection, their effects stack additively: 2 auras reduce enemy armor by 60%, 3 auras reduce enemy armor by 90%, and 4 auras completely eliminate armor from every enemy spawned in the mission entirely. There is no benefit beyond redundancy to having more than 4 auras, in the case of Trial missions with more than 4 cell members.

This ability causes affected enemies to flee and reduces their armor by 20% for the duration of the effect. The armor reduction is multiplicative on the target's total armor. Power Strength increases this armor reduction percentage; at maximized strength, Terrify can remove 56.8% of armor from foes.

As a multiplicative modifier, it does not stack additively with other armor reduction effects. Corrosive Projection will remove 30% of an enemy's total armor before Link's effect, leaving 56% of the target's armor still functioning.

This ability augment makes Shuriken find weaknesses in the target's armor, temporarily reducing its armor values by 70% for 8 seconds at max rank. The armor reduction is multiplicative on the target's total armor. Power Strength increases this armor reduction percentage; at 43%, a Seeking Shuriken removes all armor from a foe.

As a multiplicative modifier, it does not stack additively with other armor reduction effects. Casting 2 Shurikens will reduce an enemy's total armor to 9% of its original value, and Corrosive Projection will remove 30% of an enemy's total armor before Shuriken's effect, leaving 21% of the target's armor still functioning.

This ability augment makes Link drain the targets' armor, temporarily reducing their armor values by 45% for the ability's duration. The armor reduction is multiplicative on the target's total armor. Power Strength increases this armor reduction percentage; at 223%, Abating Link can remove all armor from a foe.

As a multiplicative modifier, it does not stack additively with other armor reduction effects. Corrosive Projection will remove 30% of an enemy's total armor before Link's effect, leaving 38.5% of the target's armor still functioning. 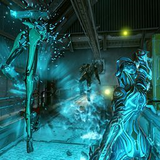 This ability augment makes Crush strain the targets' armor, temporarily reducing their armor values by 50% for 7 seconds. The armor reduction is multiplicative on the target's total armor. Power Strength does not increase this armor reduction percentage.

As a multiplicative modifier, it does not stack additively with other armor reduction effects, and multiple casts of Fracturing Crush do not compound the armor effect (it only refreshes the duration). Corrosive Projection will remove 30% of an enemy's total armor before Crush's effect, leaving 35% of the target's armor still functioning. 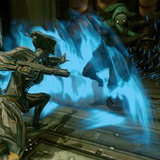 This ability augment makes Sonic Boom strain the targets' armor, temporarily reducing their armor values by 70% for 8 seconds.The armor reduction is multiplicative on the target's total armor. Power Strength can increase this armor reduction percentage and this augment can strip all the armor off of an affected enemy if the power strength is increased above 43%.

As a multiplicative modifier, it does not stack additively with other armor reduction effects (although with the ability to remove all the armor there is no need), and multiple casts of Sonic Fracture do not compound the armor effect (it only refreshes the duration). Corrosive Projection will remove 30% of an enemy's total armor before Sonic Boom's effect, leaving 21% of the target's armor still functioning.

Retrieved from "https://warframe.fandom.com/wiki/Armor?oldid=1239993"
Community content is available under CC-BY-SA unless otherwise noted.