For the soundtrack, see Archwing (Soundtrack).

The Archwing is an all-environment flight system of Orokin design used by a Tenno to fly and engage in combat in space, offering a potent mix of firepower and mobility to engage spaceborne enemies. Unlike Warframe's traditional land-bound gameplay, Archwing missions take place on a three-dimensional plane, offering nearly complete freedom of movement in all directions. Though intended for space use, the Archwing also has the ability to engage in both atmospheric (Plains of Eidolon, Orb Vallis, and Cambion Drift) and underwater (Grineer Sealab) combat.

An Archwing comprises three components, each of them are acquired through different means depending on the Archwing.

Players can acquire their first Archwing, the Odonata, during The Archwing quest. Completion of the quest is also required to obtain the rest of the Archwings.

The Amesha, Elytron, and Itzal can be researched from the Tenno Lab in the dojo.

The Archwing section of the Arsenal can be accessed via the vehicle button upon bringing up Select Mode at the bottom right of the main Arsenal overview and has the following three sections available:

Once a player has built and acquired an Archwing, they can participate in dedicated Archwing missions, with two possible tilesets: Free Space, a Grineer-controlled territory which puts players in open space with lots of room to explore and maneuver and Corpus Ship, where players speed down through tight corridors inside a severely damaged Corpus ship. An Infested variation of this tileset is used in the Jordas Golem Assassination mission. Archwings are also mandatory on Uranus, and are used to move in the underwater sections of the Grineer Sealab.

In Free Roam missions, Archwings can be deployed via Archwing Launchers.

Archwings can also be used in Empyrean mission, representing a faster, albeit much more vulnerable, method of moving around the map, as well as being used to board Crewships, points of interest, and the Murex ships.

Combat is mostly identical to traditional controls. Stances are unavailable, though blocking and Heavy Attacks can be performed. Jump Attacks and Wall Attacks are also unavailable, with only Slide Attacks being available in the form of a swirling slash that deals higher damage.

Archwings have their own set of exclusive weapons – a Primary (Arch-gun) and a Melee (Arch-melee) – and abilities, which replace the player's selected Warframe weapons and abilities; Submersible and Free Roam missions, however, still use the Warframe's primary and secondary weapons. Instead of having a magazine and total ammo pool, Arch-guns have a single pool of ammo that acts as the magazine. This ammo will replenish itself over a short period of time after the weapon hasn't been fired for a second or two.

Most Warframe mods do not carry over to Archwing missions, with the exception of Auras, radar mods (only for their radar component), Adaptation

Mesa's increased health without a melee weapon, apply as well. Some Passives affect Archwings differently in atmospheric versus space usage.

Veritux are the starter weapons, first used during the final events of The Archwing quest. Additional blueprints of these weapons can be bought from Cephalon Simaris for 100,000 Standing

Most Archwing weapons consist of parts which are obtainable as offerings from the six core Syndicates, each requiring Rank 2-3 and costing 20,000 Standing

20,000 Standing. Blueprints that use these parts are obtainable from the Market. All weapon parts except for the blueprint are tradeable.

The Archwing weapons that do not come from the six Syndicates include: 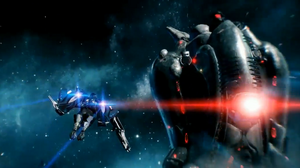 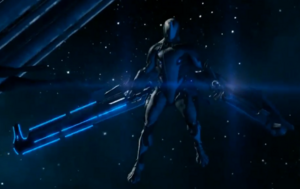 A frontal view of the Archwing, along with the Veritux. 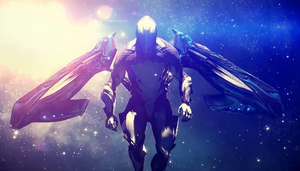 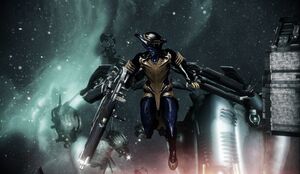 A look at Warframe How to get Archwing

HOW TO GET THE ARCHWING ODONATA Update 15 - Warframe Hints Tips

Archwing has been upgraded to a full six degrees of freedom! Now, you’ll be able to pilot your Archwing like a true flight simulator with full 360-degree yaws and pitches. (Note: submersible missions will still use the old controls)