Arcanes are activated by accomplishing its trigger condition (e.g. landing a Critical Hit, or taking damage, etc.), which will then have a percentage chance to activate the stated effect. If an Arcane's effect has a limited duration and is refreshable, the duration can be renewed by triggering it again.

An Arcane can be ranked up by sacrificing duplicate unranked Arcanes of the same type, increasing their effects. This can be done inside the Orbiter:

Every successive rank-up requires one more Arcane than the previous one. The maximum rank of an Arcane depends on its type:

Update 27.3 (2020-03-24) added all Eidolon Arcanes in Operation: Scarlet Spear, purchasable from Little Duck using Scarlet Credits for the duration of the event. In Update 29.6 (2020-12-18), the Arcanes returned through Operation: Orphix Venom, purchasable from Father using Phasic Cells for the duration of the event. Update 29.10 (2021-03-19) permanently added the Orphix mission to the game, with all the Arcanes available through Rotation C.

Update 29.5 (2020-11-19) introduced 3 additional Warframe Arcanes, which can be obtained from Arcana Isolation Vaults.

Arcane Revives is a feature that is only gained from equipped Warframe Arcanes that is Rank 3 or higher. Other types of arcanes such as Magus or Exodia do not benefit from this. Each Arcane Revive equipped allows the player to revive their Warframe an additional time, with a maximum total of 6 revives usable in a mission.

10,000 Ostron standing upon reaching the rank of Kin, with the exceptions of Exodia Contagion and Exodia Epidemic, which are exclusive to Operation: Plague Star.

10,000 Solaris United standing upon reaching the rank of Old Mate.

All primary and secondary weapons have unique arcanes obtainable through The Steel Path. Unlike other arcanes, these slots must be unlocked using Primary Arcane Adapters and Secondary Arcane Adapters, which can be bought from Teshin for 15 Steel Essence. The arcanes themselves are guaranteed to drop by Acolytes.

These arcane slots are initially hidden until the player is eligible to partake in The Steel Path. They also occupy their own spot that is separate from Kitgun's Pax Arcanes.

The Incarnon Weapon vendor in the Chrysalith also offers 10 new Arcanes in their Offerings! They also have a chance of dropping from defeated Thrax and Void Manifestation enemies.

Molt Efficiency (Warframe)
While Shields Are Active: Gain 6% Ability Duration per second, up to a maximum of 36%.

Emergence Dissipate (Operator)
On Void Sling: Press the fire input during Void Sling to dissipate the endpoint in a 10m radius. Enemies hit have a 100% chance to create a short lived Void Mote that replenishes 10 Energy on pick up.

We are going to start with the biggest change: You can now add Arcane Slots (name not final) to your Primary and Secondary weapons, and fill the Slots with new Arcanes that enhance and reward diverse gameplay.

Our entire approach to making Guns a comparable choice in your Arsenal orbits around the notion that Gunplay is fundamentally more varied than Melee: there are pinpoint accuracy guns, AOE guns, and high fire rate Guns (and everything in between). There’s reload times, magazine sizes, and more. We want to make these varied options better at what they do by rewarding you for using them well - thus, Arcanes!

Because the Gunplay falloff is more of a late-game problem, these new Upgrades will be earned through late-game content systems -- namely, the Steel Path. You’ll be able to get the Arcane Slot Unlockers from Steel Path Honors, whereas the Arcanes themselves drop from Acolytes in the Steel Path! The spawn frequency of Acolytes is also being increased, meaning you’ll get more Steel Essence, as well as more chances for the Arcane you want. All Acolytes will drop them!

There are 6 Arcanes (3 Primary, 3 Secondary) that you’ll be able to rank up and put to put into the new Slots:

The first Primary Arcane is designed with Primary weapons that perform well as AOE or high rate-of-fire weapons. This Arcane will reward kills with the following stats at Max rank:

The more you kill, the more damage you can build up. Groovy!

The final Primary Arcane is designed with using your full loadout in mind, enter Melee synergy:

Secondary Weapons will receive the same options as Primary Weapons for their Arcanes, but with their own version. In practice, you’d be able to equip yourself with a Precision Secondary like the Knell, a high-fire rate Primary like the Grakata, and select the Arcane that will reward each play style best!

The stats are the same for the Secondary versions of the New Arcanes:

Ultimately each Arcane stacks up to the same amount of damage, but it’s how you choose to get there that counts. Precision? Spray and Pray? Melee synergy? Your choice!

Actualise... synergy... SYNERGISE! Residual Arcanes and Theorem Arcanes are geared towards synergising with each other to provide a different method of imposing elemental damage. Discover these new synergized Kitgun and Warframe Arcanes as rewards from the new Isolation Vault Bounties.

20% chance to create a pool of toxic blood for 12s, dealing 40 Toxin Damage/s. Standing in the area applies the Toxin Damage to Theorem Arcanes.

20% chance to create a frigid mist for 12s, dealing 40 Cold Damage/s. Standing in the area applies the Cold Damage to Theorem Arcanes.

20% chance to spawn volatile hives for 12s that explode when enemies approach for 80 Heat Damage in 10m. Standing in the area applies Heat Damage type to Theorem Arcanes.

Standing in a zone created by a Residual Arcane creates a globe that orbits the player every 2s. The globes will strike the nearest enemy within 15m dealing *150 damage *increasing their vulnerability to the globe’s damage type by 200% for 6s. Globes will persist for *30s upon leaving the zone.

Standing in a zone created by a Residual Arcane increases weapon damage by *12%/s stacking up to 15x. Effect persists for 20s upon leaving the zone.

Standing in a zone created by a Residual Arcane increases damage of Companions and summoned Allies within *90m by *24%/s stacking up to 15x. Effect persists for 20s upon leaving the zone.

After years of Arcanes as a system - with several additions to the offerings and replacement locations, we are doing several things:

Arcane Acceleration: On Rank 5: On Critical Hit: 30% chance for 90% Fire Rate to Primary Weapons for 9s.

Arcane Barrier: On Rank 5: On Shield Damaged: 6% chance to instantly restore all Shields.

Arcane Bodyguard: On Rank 5: On 6 Melee Kills within 30s Heal Companion for 900

Arcane Energize: On Rank 5: On Energy Pickup 60% chance to replenish Energy to nearby Allies Added duration and Cooldown added (cannot re-trigger while active). Arcane Energize will still give Energy to toggled Warframe Abilities - this has been asked a lot.

Arcane Eruption: On Rank 5: On Energy Pickup 100% chance to Knockdown nearby enemies.

Arcane Precision On Rank 5: On Headshot: 100% Chance for +300% Damage to Pistols for 18s Cooldown added (cannot re-trigger while active).

Arcane Pulse - Increased stats and added cool down On Rank 5: On Health Pickup: 60% chance to Heal nearby allies

Arcane Tanker- Increase the durations cool down On Rank 5: On Archgun Equipped: +1200 Armor for 60s

Arcane Trickery On Rank 5: On Finisher: 15% chance to become invisible for 30s

Arcane Victory On Rank 5: On Headshot Kill: 75% chance for +3% Health Regeneration/s for 9s

Why: The reasoning here is mainly toward the ability to equip two of the same Arcane. This reasoning is one of past inconsistency and time determining intent. There are a lot of builds that specialize the use of two Arcanes, but we want to encourage a variety instead of duplication. Arcanes are the only Upgrade system in the game that allows two of the exact same upgrade to be equipped - and we would rather players have variety than duplications. In the same way you can’t equip Amalgam Serration and regular Serration, you can’t equip multiple Rivens per weapon, or any duplication of Mods at all, Arcanes will follow. But we are making major changes to the Ranking (up from 3 to 5 with power changes). Instead of having 2 of the same Arcane with a double effect, you can now choose between 2 different Arcanes that behave (generally) at 1.5x efficacy than before.

The following rewards have been added to the Arbitrations drop tables:
Stats shown at max rank* 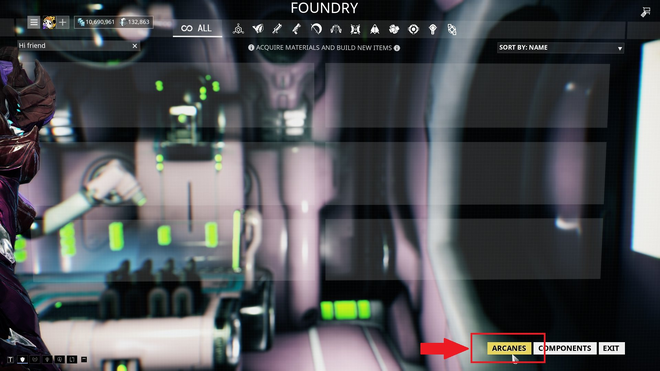 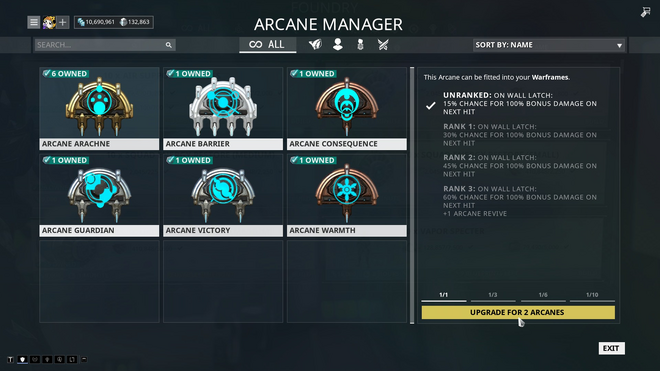 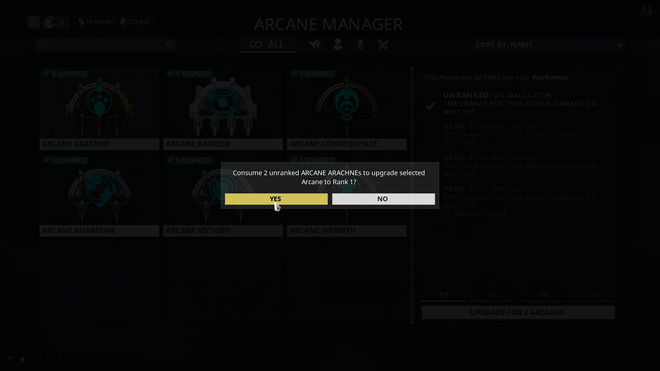 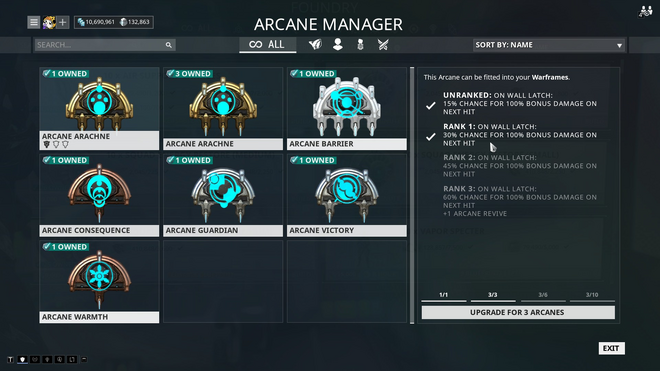