On Shield Damaged
3% chance for +30% Shield Recharge for 12s

Arcane Aegis is an Arcane Enhancement that provides a chance whenever the player receives damage to shields to regenerate Warframe Shields for a short time.

Awarded for capturing the Eidolon Gantulyst. 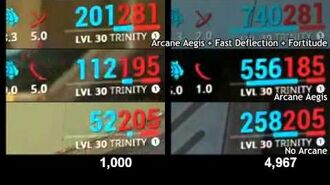