Inspect your personal quarters upon finishing the Chains of Harrow quest.

Apostasy Prologue is a short main Quest released in Update 22.8, not found in the Codex until it is begun. This quest relives Margulis' final moments with Ballas and the latter's meeting with the Lotus.

A faint purple orb at the end of the Orbiter's Personal Quarters beckons the attention of the Tenno. Upon interacting with it, the Tenno is transitioned to somewhere on Lua where they following a purple trail across the desolate Orokin architecture in search for the unknown. As they travel through, they experience the final moments of Margulis before her execution leading up to the discovery of Lotus' enclave at the end of the trail. There, Orokin Executor Ballas appears to apologize to the Lotus and promises to not abandon "Margulis" again. Holding hands, both Ballas and the Lotus disappear into a mysterious light, leaving the Tenno in their Operator form clutching at the remains of Lotus' helmet. The Lotus has left. The mother has abandoned her children.

In order to access this quest, the player must have first completed the Chains of Harrow quest, as well as have access to their Orbiter's Personal Quarters.

In the Personal Quarters, a holographic, violet Lua orb can be seen floating at the end of the room near the port window. Approaching the orb and touching it will transition the Tenno into the loading screen. The player does not need to be in Operator mode, but the player cannot be in a squad as they touch the object.

After loading in, the player will find themselves on Lua to find yet another orb. This time, approaching the orb will reveal a purple trail that will lead the player through the map. While following the trail the player will hear past dialogue between Margulis and Ballas, from before Margulis' execution.

At the end of the trail is a broken Reservoir. The trail will lead down a pit where the player will jump down and be forced to enter Operator mode.

The Void: The Jade Light

There, the player will hear echoes of the last few moments leading up to Margulis' execution and find a pod at the end of the hall, where a cutscene will play.

As the pod opens the Lotus is revealed inside, with wires connecting to the back of her head. The Lotus extends a greeting, and before the Operator can reply, Ballas himself replies to it. He then steps forward and apologizes to the Lotus for being gone for so long. The Lotus tries to explain that she is not Margulis, but Ballas insists and waves out his hand. A wave of energy flows out (which also slightly distorts the player's screen similar to the Somatic disruption during The Second Dream) and the Lotus is detached from the pod.

She then removes her mask as Ballas promises not to abandon "Margulis" again, and takes his hand. Both Ballas and the Lotus walk into a blinding light away from the Operator. Attempting to follow Ballas, the Operator is knocked back by an energy shockwave instead.

After the Lotus and Ballas disappear the Operator clutches the Lotus' dropped helmet, looking distraught at now being alone.

Back at the Orbiter, Ordis states that he will search for the Lotus' current whereabouts and in the meantime attempt to synthesize the Lotus' mission directives.

All transmissions that were normally handled by the Lotus will now appear as a purple Lotus-shaped hologram, to signify Ordis attempting to act in the Lotus' place. The transmission's audio and visuals will also glitch out occasionally, covered by static for a split-second before returning to normal. The small plinth inside the Personal Quarters will also display the Lotus' headgear.

They opened the chamber door just in time for me to see it happen; the Archimedian erupting into a flash, jade-like and blinding. I knew her. She was the greatest scholar of genetics who ever lived. Except now she was nothing but mist and gore.

Avantus noticed this and waved her hands over the nearby console to unlock the case. 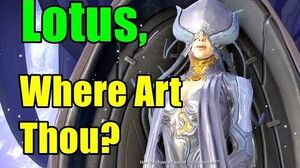 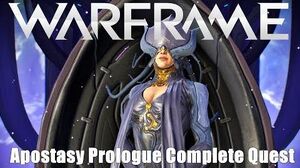 Retrieved from "https://warframe.fandom.com/wiki/Apostasy_Prologue?oldid=2052993"
Community content is available under CC-BY-SA unless otherwise noted.