An Infested heavy melee unit, the Ancient Healer stands out for the ability to cast a damage mitigation aura around surrounding allies.

This aura grants Overguard to nearby allies, adding an additional layer of health equal to nine times the Ancient Healer's while rendering them immune to most forms of crowd control. Damage done to protected allies will heal the Ancient Healer (up to 150% health). Unlike the other two Ancients, Healers cannot affect other Ancients under its aura, including themselves.

They are light blue in color, with bright yellow-green mandibles.

Eximus Ancient Healers are sent as a syndicate death squad from New Loka, and are available as Volatile Eximus Specters for purchase at the first rank. 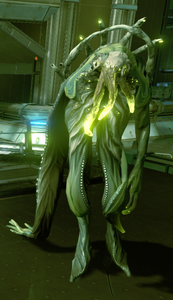 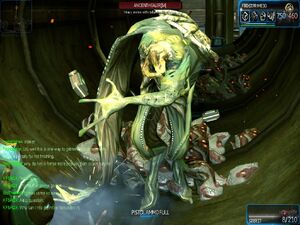 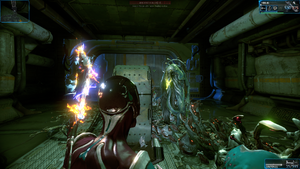 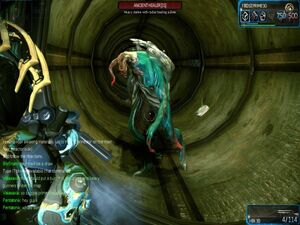 Ancient Healer at start of U9 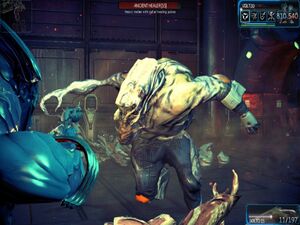 Ancient Healer prior to U9 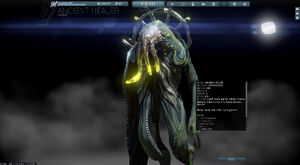 Currently, Ancient Healers provide a 90% damage reduction to their allies in range and increased resistance to crowd control abilities. Visually, this is only indicated by a pulsing glow on buffed enemies in range. This is often confusing if you don’t already know that the crowd control resistance and damage reduction is being applied from Ancient Healers.

We have changed Ancient Healers to provide allies in range with Overguard that is applied at 9x their overall Health.  This value simply matches the current level of damage reduction and crowd control resistance provided by Ancient Healers, but with Overguard it will now provide a clear visual indicator that the enemies are being boosted by their Ancient ally!

Overguard can be taken out on enemies bolstered by Ancient Healers through a few different ways: