Ammunition (or ammo for short) describes the variety of bullets, bolts, slugs, cartridges, batteries, and more that enable all Primary and Secondary weapons to be fired. The only weapons that do not use ammo are Melee weapons.

Remaining ammunition for the currently active weapon is indicated in the bottom right corner as two numbers with a divider between them. On the left side, the number indicates how much ammo is currently loaded inside the weapon's magazine. On the right side of that division, the number indicates how much more of that type of ammo the player is carrying.

For a list of max ammo counts of all weapons, see Weapon Comparison.

There is a maximum amount of ammunition that can be carried for each specific weapon: for example, Warframes can carry 540 units of fuel for the

Ignis, but only 20 rockets for the

Ogris. Enemies do not track or run out of ammunition, though their weapons do have a magazine size and they must reload accordingly.

Ammo Maximum has no effect on weapons that lack an ammo pool, such as

The number of ammo rounds a weapon holds.

Weapons have a magazine capacity or clip size that limits their ammo expenditure. Weapons can load ammo up to their magazine size; after shooting the whole magazine, the weapon must be reloaded. Because reloading takes time, a low magazine size can significantly reduce the sustained DPS of a weapon in relation to its expected burst DPS.

In-game, ammo efficiency determines to the number of shots that occur before consuming ammo, hence being more "ammo efficient". For example, if a weapon has 75% ammo efficiency and each shot originally costs one ammo, every four shots will use one ammo. Sources that grant no ammo consumption for the duration of its buff can essentially be treated as 100% ammo efficiency.

Sources of ammo efficiency stack multiplicatively with each other and includes: 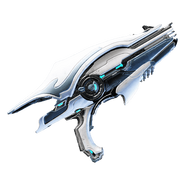 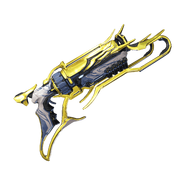 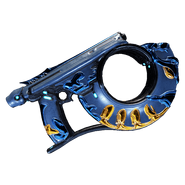 Ammo Economy is a metagame measurement of how effective a weapon is in using its ammo to damage enemies. In many cases, ammo economy is considered irrelevant because a sufficient amount of ammo packs drop from fallen enemies—but there are a number of weapons with poor ammo economy which can easily cause a player to run out of ammo faster than they can replenish their stocks. It can be derived from the following calulations:

The longer it takes to deplete a weapon's ammo reserves and the higher the average damage per ammo, the better ammo economy it has.

Ammo economy is most relevant on weapons with high fire rate. Modding a weapon with damage mods (like

Serration) increases both damage per second and damage per ammo, while increasing fire rate (through

Speed Trigger) only improves damage per second. When playing missions against tough enemies that require many shots to be killed, players should consider eschewing fire rate for straight damage because of this reason.

To compensate for poor ammo economy, all ammo types have a corresponding Aura mod; these are the scavenger mods, which can be equipped to increase the amount of ammo received when picking up an ammo pack.

And lastly, all weapons can equip a mutation mod for their respective ammo type. Ammo mutation mods convert the ammo packs of other weapon types into those for the active weapon, as long as the other ammo pool is full.