The Ambassador is a Corpus assault rifle whose Alternate Fire allows switching between fully-automatic rounds or a long-ranged explosive shot.

This weapon's main blueprint can be acquired from Rotation C of Empyrean Survival missions in Venus Proxima, Neptune Proxima, Pluto Proxima, and Veil Proxima. The component blueprints are dropped by Aurax Atloc Raknoids and Narmer Raknoids. All parts can be traded between players. 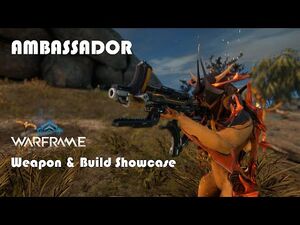