https://www.warframe.com/droptables
CODEX
A diabolical mess of limbs, this Amalgam fighter doesn't care which way is up. A fast-galloping unit that attacks with crushing melee blows, a repeater cannon and destabilizing ground slams.

The Amalgam Satyr is a Corpus Amalgam hybridized with Sentient technology. Possessing three pairs of legs, with one pair also doubling as blasters, it is a fast unit that alternates between melee and ranged attacks.

Amalgam Satyrs possess Damage Reduction that scales depending on your weapon's DPS excluding critical hits. DPS is calculated by 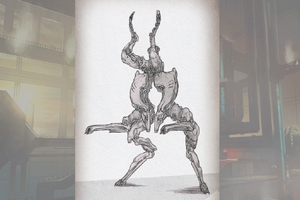