Orokin Cell 0.38%
CODEX
An amalgamation of a Corpus Sniper and unknown sentient form. Not only is this fighter capable of pinpoint accuracy, it can also manipulate matter to create a Spectralyst clone of any enemy, including Tenno.

The Amalgam Heqet is a Corpus Amalgam hybridized with Sentient technology. Wielding the

Komorex with incredible accuracy, they can also create Spectralyst clones of their enemies, including the Tenno.

Amalgam Heqets possess Damage Reduction that scales depending on your weapon's DPS excluding critical hits. DPS is calculated by 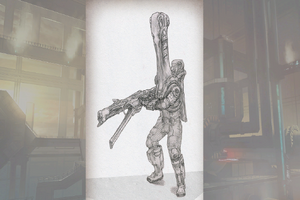