Amalgams are units hybridized with Sentient technology, developed by Alad V to be used as weapons for the Sentients.

Corpus Amalgams spawn exclusively on the Corpus Gas City tileset, with Alad V announcing their presence. Up to three Amalgams can spawn, drawn from the pool below;

All Corpus Amalgam units, with the exception of the Alkonost and the Osprey, have variants that can be encountered in hidden rooms or rarely in the field. They count as part of the Sentient faction and will therefore attack Corpus units. These variants act slightly different from their normal counterparts.

Demolysts are a special variant of Amalgams that only appear in the Disruption game mode on Ganymede, Jupiter. They are essentially a type of Demolisher that spawns once a conduit objective has been triggered, rushing in to destroy it. Demolysts emit a loud sound and, once close enough, are given a red marker. They will immediately beeline for any active conduit and will begin to self-destruct when they've reached one, destroying the conduit if not killed in time.

A Demolyst will pulse out a red aura every 5 seconds with a radius of 6.5 meters, immediately dispelling and disabling all Warframe abilities within range and on itself, similar to a Nullifier Crewman's bubble.

The Wolf of Saturn Six and his Saturn Six Fugitives are assassins who were introduced in Nightwave: Series 1 – The Wolf of Saturn Six. The Wolf, formerly a Grineer rogue criminal who escaped from the Saturn Six Max-Pen prison, started to actively pursue the Tenno with his pack. As shown in the fourth diorama, the Wolf and his pack were lured into a trap by Alad V, who injected them with "Sentient juices" turning them into a much more powerful and fearsome opponent. However, the fifth diorama shows the Wolf breaking free from Alad V's clutches.

They are the first Amalgam units in the game not created by hybridizing a Corpus.

There are 9 Amalgam Mods in total: 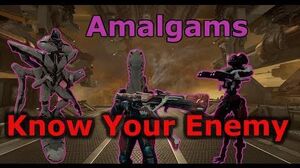