CODEX
The devastating power of the Soma rifle compacted into two elegant pistols.

Porvis tells us he compiled much of this tale from overheard exchanges between members of the Seven, and details that remained consistent in courtly whispers. He tells us the second 'frame suffered the same fate as the first.

Reacting, Ivara whirled and promptly vanished. But, one clutching gesture in her direction and Ivara's powers fled, her cloaking field nullified. Visible, vulnerable, she loosed a Dashwire arrow to a high alcove... but it never came. No escape. The Myrmidon was upon her. The Huntress spun, opening fire with Aksomati pistols to send that devil scrambling for cover, arm thrown protectively across that twisted, armored head. That clutching gesture was the key.

Ivara needed a plan, and she needed it fast.
—Drusus

The Aksomati's blueprint can be purchased from the Market. 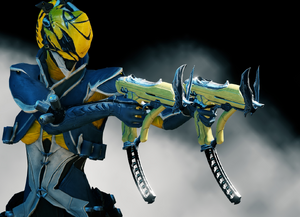 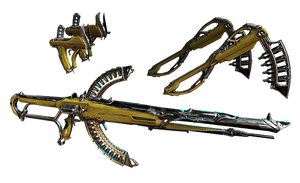 Aksomati as seen in the Supreme Soma Set bundle. 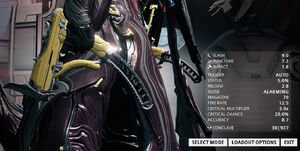