Affinity is the in-game mechanic for experience points. Warframes, Archwings, Companions and weapons are all capable of earning Affinity. It is earned by killing enemies, hacking terminals, completing objectives/Missions, using Warframe powers, or picking up Affinity Orbs.

Affinity is only shown numerically in the player's profile. Elsewhere, they are shown only as progress bars to the next level for that piece of equipment, such as in the Arsenal, during missions, or in the end-mission report.

Upon gaining enough Affinity, equipment will rank up and (once the equipment's rank exceeds a player's Mastery Rank) gain one extra point of Mod capacity (two points when supercharged via an Orokin Catalyst or Orokin Reactor), used for applying mods. Affinity is stored in each specific item, not the player's character/account; if an item is sold or used in crafting, it loses all of its associated Affinity and ranks.

The amount of Affinity a weapon or frame has earned during a mission can be seen in the post-mission report, just to the left of the reward info box, where it is referred to as XP (experience).

Charm also has a chance to provide double Affinity gain for a duration.

Warframes and weapons gain Affinity for several types of actions, detailed below. Unless specified otherwise, all Affinity gained uses the split according to the general rule: 25% of the amount goes to your Warframe and 75% of the amount is divided evenly among all equipped weapons (18.75% each for four weapons while Arch-gun is summoned through Archgun Deployer, 25% each for three, 37.5% each for two, or the full 75% if only one is equipped).[1]

Deployable gear, such as Archwings and Necramechs, only gain affinity when deployed.

Operators gain their own Affinity, similar to a Warframe. They only receive affinity when deployed.

Companions gain their own Affinity, similar to Tenno.

Killing unaware enemies will trigger a Stealth Kill Affinity Bonus, which increases the amount of affinity that a player gains from killing said enemy. A notification appears in a player's HUD to the left of the shield counter upon performing a stealth kill, which will display the bonus affinity value for that kill, as well as the time remaining for the combo. The default bonus affinity value is 100%, which can be increased by performing a subsequent stealth attack within 30 seconds of the previous one, which will add another 100% to the bonus value, e.g. killing a second enemy stealthily will grant a 200% affinity multiplier, the third granting 300%, and so forth until it caps out at 500%, whereupon any successive stealth kills will provide said bonus as long as they are made within the time limit. Stealth kill affinity bonuses can be initiated using any attack as long as the enemy is unaware of the player's presence, though melee weapons grant twice the amount of stealth kill affinity compared to ranged weapons or abilities.

Oddly enough, certain Warframe powers (like Paralysis) and Melee Combos that initiate stagger may initiate stealth kill affinity bonuses upon performing a Counterattack Finisher, even if the enemy was previously aware of the player.

Killing an enemy that spawned within 5 seconds will not count towards the stealth affinity multiplier.

If a player completes a mission successfully they gain bonus Affinity based on the amount gained during the mission. Bonus Affinity is shown as white in the end-of-mission report and is an additional 125% of the base affinity earned for each item.

Due to bonus affinity, leveling an item up to a certain level in a single mission, and completing the mission, will result in that item becoming max rank:

When playing with other players, Affinity will be shared among the squad if they are within a 50-meter radius. This can be increased with Fosfors to 200m or

Mending Unity (+25m at max rank). Some Warframe Abilities also have their ranges tied to this particular range. 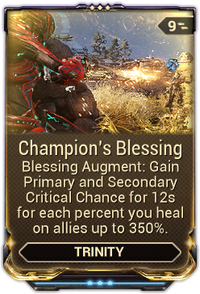 Champion's Blessing is a Warframe Augment Mod for

Blessing that increases primary and secondary Critical Chance based on the total percentage health healed, up to a +350% bonus.

In addition, some Warframe Augment Mods may augment an ability with a mechanic tied to Affinity Range such as

To reach a given level from unranked, a Warframe or Sentinel needs 1000 × level2 Affinity in total. A weapon needs half that amount.

To reach the same level from the previous level, a Warframe or Sentinel needs 1000 × (2 × level − 1) Affinity. Again, a weapon needs half that amount.

Paracesis, Kuva Weapons, Tenet Weapons, and Necramechs. Note that this chart does not accurately reflect on total cumulative Affinity needed to rank up to 40 as you have to Forma the weapons five times in order to increase the max rank to 40.

The cumulative Affinity to rank for the Paracesis and Kuva Lich weapons including Forma cycles is as follows:

When you kill an enemy, the Affinity gained is shown on screen underlined in blue. The formula enemy affintiy scales at is as follows:

Because the square root is taken of the enemy's current level, the actual benefit of facing high-level enemies is minimal. For example, killing a level 100 Napalm would give 1213 Affinity, less than twice the Affinity you would get from a level 3 Napalm (623). Therefore, "farming" Affinity is easier when killing many low-mid level enemies instead of taking on high level enemies.

For further reading on this subject, consider the Affinity and Affinity Density chapters of the Enemy Level Scaling article.

These are based on opinions and may not be 100% true. These should be viewed as advice for farming Affinity until better facts are proven.

We’ve increased the Shared Affinity Range in Free Roam missions from 50 meters to 250 meters! When implementing the change to make Necramech’s level up to 40, it prompted the conversation of Necramech leveling and its restriction to Free Roam missions. With the addition of Bonewidow, it felt appropriate to dial the Shared Affinity Range up for these much larger tilesets. While it’s always ideal to stick together, we hope the 250 meter range allows you to both level up your Necramech faster and venture a bit farther in the landscape.

Based on reports and experiences with slow-ranking Sentinels, we have changed the way Experience is distributed amongst your feisty friends.