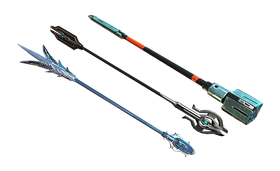 A collection of unique arrows, compatible with any bow.

The entire bundle is available in the Market for

‍50 under the Bundles section. Each skin can also be bought individually in the Primary Skins section under Weapons.

These skins can be equipped as cosmetic items under the Attachments section of a bow's Appearance options.

Retrieved from "https://warframe.fandom.com/wiki/Adventus_Arrow_Collection?oldid=1017269"
Community content is available under CC-BY-SA unless otherwise noted.