Acid Shells is a

Sobek-exclusive mod that causes enemies killed by the Sobek to explode, dealing a flat amount of

Corrosive damage plus a percentage of the enemy's maximum health as

Blast damage in an area of effect. 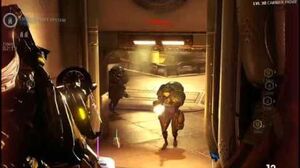