Not to be confused with Recoil.

How far projectiles will deviate from the reticle. Higher values are more accurate. Accuracy is improved while Aiming.
—In-game Description

Accuracy describes a ranged weapon's ability to land shots close to where it is aimed, and how close to its reticle will multiple shots land over a given period of time. This is not the same as player accuracy, which is percentage of shots fired by the player that hit an enemy target.

While some weapons—including full-automatic weapons—are capable of landing shots directly onto the center of their aiming reticle upon their first shot, a weapon's accuracy value determines the chance of these shots spreading away from the reticle: the lower the accuracy, the higher the chance of the shot straying off the reticle. Consequently, accuracy determines the weapon's shot deviation over multiple shots in a given period of time: a high accuracy weapon will see multiple successive shots land close to one another, while a low accuracy weapon will see the same shots spread out further apart in different directions.

In other words, the accuracy stat shown in the arsenal is not a percentage. Instead it is a metric used to compare weapon accuracies relatively. Typically, a weapon with a 100 accuracy rating will be be more "accurate" than a weapon with 25 accuracy.

Note that sniper rifles and bows list their accuracy as being fired from the hip and not scoped, or zoomed in (default hold RMB ). These weapons typically have 100 accuracy while scoped or zoomed.

Shooting a weapon while aiming will typically increase the weapon's accuracy rating. Though the accuracy increase differs from weapon to weapon.

There is no accuracy stat for Melee weapons, thus melee is not affected by any accuracy modifiers.

Informal categorization of some common accuracy ranges. The longer a weapon is fired and the farther its target, the more it will reflect on its accuracy rating.

A weapon's accuracy value generally becomes more important the higher its rate of fire is, as the weapon's successive shot grouping worsens the faster it fires. For example, while the

Stradavar has a lower listed accuracy value in its automatic mode (14.3) compared to the

Grakata (28.6), the Stradavar can much more consistently land each of its shots with closer grouping at longer range due to its lower fire rate, while the Grakata's high fire rate makes its shots spray out at longer ranges. However, the Grakata is capable of landing shots even more precisely than the Stradavar if fired slowly, or one shot at a time. Because accuracy values are more important for weapons with higher fire rates, it is more applicable to assault rifles and machine pistols, while less important for weapons such as semi-automatic rifles.

Flux Rifle possess perfect accuracy (an accuracy value of 100) where all of their shots land directly on the reticle regardless of range or fire rate, while other weapons like the

Ignis can mostly disregard accuracy as a mechanic due to their unique area-of-effect characteristics, capable of hitting multiple enemies regardless of aim.

Accuracy also affects Multishot characteristics. In the case of hitscan weapons, the lower the weapon's accuracy, the more likely that every pellet generated from multishot will deviate from the trajectory of the main pellet. But for non-hitscan weapons with projectile travel times, even the trajectory of the main projectile can be off-centered by using multishot, with the effect being more pronounced the slower the Projectile Speed value is. Therefore, using mods that decrease accuracy like

Heavy Caliber on projectile-based weapons, can be extremely detrimental for medium to long-range use if it is combined with multishot.

Thrown weapons such as

Castanas and weapons that shoot arcing projectiles like the

Tonkor will typically have an accuracy stat of 100. Despite having a high accuracy rating, these weapons still possess notable spread and deviation in the projectiles' trajectory away from the reticle.

The term spread is used to describe the size of the "cone" of fire from a weapon, either while under full rate-of-fire, or from a single shot with weapons that have innate multishot, like shotguns. Spread is synonymous with the inverse of accuracy. Reducing accuracy increases the area of the "cone", while increasing accuracy reduces it.

Bullets fired from weapons with innate multishot, or with the use of multishot mods like

Split Chamber, will have random trajectories angled away from the center of the reticle to varying degrees, with the accuracy value reflecting how wide that angle can be.

In addition, the faster a weapon fires, the larger the size of the "cone" around the reticle, assuming the weapon has an accuracy value of under 100.

Shotguns, as well as any hitscan-based weapons with multishot mods, fire at least one of their pellets close to if not directly centered on the reticle, with all other pellets taking random trajectories within the spread cone.

Continuous Weapons such as the

For the purposes of modding, a weapon's base spread can be calculated as such:

Some weapons have a unique behavior where the longer it is fired, the more accurate the weapon becomes: 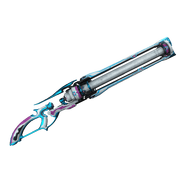 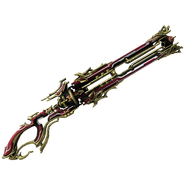 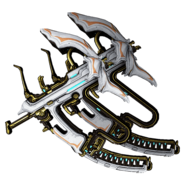 Some weapons have a unique behavior where shots are spread uniformly on the horizontal: 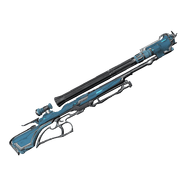 “It's taking longer than I calculated.”
This page is actively being worked on and may not be completely correct. Please assist in making this page accurate.
Formula may not be accurate for negative spread modifiers (e.g. -100% spread would compute 100/0 which does not make sense).

Note that accuracy modifying mods do not alter the accuracy linearly (e.g. putting

Heavy Caliber on a weapon with 100 accuracy will not reduce accuracy down to 45). Instead, the game takes in the mods' spread modifier (flat value) and/or spread bonus (percentage) and produces a value based on the equation below:

Vicious Spread at max rank will have: 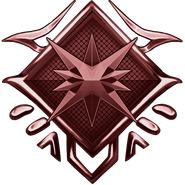 Unlike spread, recoil is an entirely separate mechanic, but it can also affect how accurately the player can shoot, as it nudges the weapon's reticle and field of vision with each shot. As such, a weapon with high accuracy but high recoil may still be difficult to shoot accurately at higher rates of fire (the

Cestra being one example, as well the recoil of the

Vectis Prime compared to the

To distinguish the two, accuracy is about how far from the reticle the weapon might shoot its projectile, but recoil is how far the reticle and camera gets nudged after the weapon is fired.

Internally, a weapon's accuracy is stored in /Lotus/Types/Game/WeaponProperties/Accuracy/Weapon/ with additional details defined in their LotusWeaponProjectileFireBehavior. For

Attica, some relevant details on its accuracy include:

Enemies determine their total accuracy via an AimGraph. The graph explicitly maps the target range and hit probability to determine their accuracies. Each enemy weapon is assigned with a different AimGraph, with each weapon type possessing different AimGraphs depending on their role.[1] For example, enemies aiming with a pistol are far more accurate up close, and the hit chance drops off as the target range increases. On the other hand, units with a sniper rifle are far less accurate up close, but get more accurate at medium and long ranges before dropping off slowly. Additionally, when enemies are made aware of the players, they will need some time to maximize their aim.