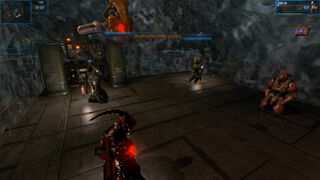 2 Versus 2 PvP was a variation of the Clan Dojo's Duel, however unlike its dojo counterpart, it does not require a dojo to be built. 2v2 duels took place in designated mission nodes, called "Colosseum", and was available to all players regardless of their clan affiliations.

This game mode was developed as a precursor to the Conclave system in order to test its capabilities, however it remains a mystery as to why non-developers could access the maps. It is possible that the developers were relying on player input to gauge the effectiveness of the new system, or was perhaps an Easter egg for attentive users, but this theory is weakened by the fact that moderators on the Warframe Forums begun to actively delete threads concerning 2v2 PVP. The game mode was finally removed from the game in Update 10.0 to make way for Conclave.

As of Hotfix 9.8.3, two Colosseums were able to be found on Mercury and Venus. Their locations were not officially released and up until their removal were apparently still under development.

In order to access the missions, players had to enter either the Mercury or Venus system, hover their mouse over Lares (Mercury) or Fossa (Venus), then press either "A" or the left arrow key and start the mission by pressing "Enter" on the keyboard.  You were also able to access the Colosseum on Mercury by hovering your mouse over Apollodorus with the same method above.

Each map had similarities and differences: both maps listed their mission mode as Assassination, had two targets ("PVP" for Mercury and "PVP2" for Venus), and had levels 2-4 and 8-13, respectively (despite the fact this didn't really matter since no enemies were present). When either map was entered, the lobby screen would include a model of Ambulas, and state that the mission being entered was Terminus (Mercury). This was the same for both maps regardless of the planet.

Unlike a standard Dojo duel, a 2v2 PVP match would continue without a time limit. The goal of the game was either to win it by eliminating the enemy players multiple times, or to have one of the teams forfeit by leaving the match. Most Warframe powers and weapons worked as intended and had no handicap on damage, and the bleedout state would activate when reaching zero health as it usually would.

The starting area in both Colosseums was a semi-translucent cube with four tiles similar to the Navigation Consoles found in Relays. These were activated with the "X" key, and once all players were kneeling down on the tiles, the match would start in 10 seconds. The cube was supposed to then disappear when timer ended, allowing users to explore the map, however the cube on Mercury's Colosseum would never disappear, and the only way to exit it would to be downed, crawl to the edge of the cube and let the bleedout timer run out. You would have then been teleported outside the cube.

Unlike normal maps which are randomly generated, Colosseums had the same layout for all players. As of Hotfix 9.8.3 none of the arenas features Energy Orbs. All players start with 50 Energy, with no way of gaining more energy unless one of the players had

The Colosseum on Mercury featured a tileset based on the Corpus Ship tileset (the Colosseum would later return as Freight Line in Conclave). This level featured both Cryogenic Leakage and Battle Damage environmental hazards scattered throughout the map. One room also included the circuit board hazard found on the tileset, but comprising of the whole room. Touching this hazard would deal

Electricity damage to the player and would emit an electrocution sound, similar to the Electrified Water hazard found on the Grineer Sealab and Orokin Derelict tilesets, and the Battle Damage hazard worked as one would expect in normal missions. However the Cryogenic Leakage hazard seemed to have no impact on players shields.

The arena has a symmetrical design, and is based more on ground conflict rather than the vertical gameplay that the Venus Colosseum offered. However, there were four large tower-like structures that were only accessible for frames with high stamina (wall-running was required). Cargo containers were positioned symmetrically on both sides of the map for flanking purposes. 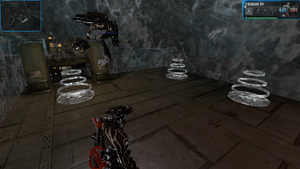 The Colosseum on Venus featured a tileset based on the Grineer Asteroid tileset. It featured multiple platforms which connected edges of the map. This Colosseum featured no Environmental Hazards.

The following bug list contains bugs which are unknown to have been amended before the Colosseums' removal.. 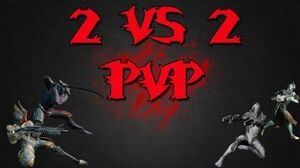 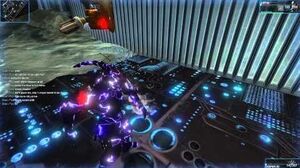 Retrieved from "https://warframe.fandom.com/wiki/2V2_PVP?oldid=1997891"
Community content is available under CC-BY-SA unless otherwise noted.