Unlike shields, health does not naturally regenerate over time, except when the Rejuvenation aura mod is equipped by at least one member of the cell. Otherwise, damage inflicted upon health must actively be healed either by picking up a Health Orb (and Energy Orbs with Equilibrium) or directly by a few certain Warframe abilities. Trinity and Oberon are the two Warframes with an inherent ability to explicitly restore health to all Warframes within the cell, and Nekros can Desecrate nearby corpses for a chance to spawn more health orbs. A Chroma in

Heat can raise both players' current and maximum health temporarily with Elemental Ward, and when the effect runs out, only the maximum health returns to its original value; effectively, the affected players have restored that much health. Additionally, Inaros's Scarab Swarm ability is capable of healing allies that are near enemies being affected by the ability.

Aside from the above abilities, Nyx is able to use Mind Control on Corrupted Ancients, enemies which can heal surrounding allies. Somewhat similarly, if a Nekros slays a Corrupted Ancient, it can be resurrected on the side of the Tenno by his ability, Shadows of the Dead.

Shadows Of The Dead

If Limbo has Haven or Hydroid has Curative Undertow installed, either one can act as a healer for the entire cell. Pool of Life increases the healing capabilities of Trinity's Well of Life power. Finally, Saryn can heal herself personally if she equips Regenerative Molt, reducing the burden she might place on their allies or else enabling her to solo better. 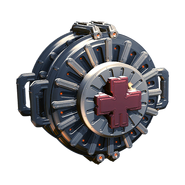 There are PvP-only mods that allow for players to regain health based off their combat performance, and Syndicate-purchased mods that restore health after gaining enough affinity to meet the necessary thresholds. Lastly, Life Strike will restore health to the Tenno as a percentage of damage inflicted by the equipped melee weapon.