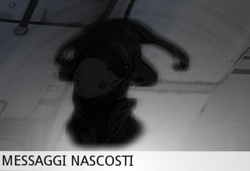 In order to unlock this quest, the player must purchase the Hidden Message blueprint and craft it. Below are the requirements for crafting the item:

After the item is crafted, this quest will be unlocked -- Go to the Quest section of the Codex, select the quest, then click "Begin Quest" to start.

Olympus is an Exterminate mission set in an Infested Ship with their levels ranging from 25-35. Completing this mission will award Mirage helmet blueprint, which the player must craft in order to continue the quest.

During the mission, the Lotus will send cryptic transmissions to the Tenno, which uncover clues to the War of the Sentients. The first transmission is received at the start of the mission.

With this, the Tenno will be awarded the Mirage Helmet Blueprint.

Upon completing the Mirage Helmet, Ordis finds out that there is another hidden transcription on the helmet. He will begin to recite the transcribed riddle again, along with his opinion on it. The riddle can be viewed again in the inbox.

The answer to this riddle is Calypso, Saturn. In Greek Mythology, Calypso was a nymph who is popularly remembered for her role in Homer's epic poem, Odyssey. It is said that Calypso enchanted her singing to trap the fabled Greek hero Odysseus in her island and make him her immortal husband -- Forcing Oddyseus to be separated from his wife, Penelope.

Calypso is a Survival mission set in an Infested Ship with their level ranging from 25-35. Completing this mission will award Mirage systems blueprint, which the player must craft in order to continue the quest. During the mission, again, The Lotus has recovered more of Mirage' void imprint, further telling Mirage's slow death. You will receive these transmissions from the Lotus at the start of the mission.

As expected, upon crafting the Mirage systems, there is another hidden transcription on the systems. Ordis recites the transcribed riddle again, along with his comment on it. The riddle can be viewed again in the inbox.

One more act before your prize is caught.
An ancient sea creature, take a whirl or not?
Look for the monster that swallowed sailors of yore.
Make a mistake and you're sunk. Nothing more.

Charybdis, Sedna is the answer. In Greek mythology, Charybdi was a sea monster, later rationalised as a whirlpool and considered a shipping hazard in Strait of Messina. It is said that three times a day, Charybdis swallowed a huge amount of water, before belching it back out again, creating large whirlpools capable of dragging a ship or even a galleon underwater.

Upon destroying the hives, the Lotus had managed to recover the very last blueprint of the now-extinct Tenno.

Upon completing the mission and returning to your ship, you will be rewarded the Mirage chassis blueprint. The Lotus will immediately order you to forge the Mirage warframe. 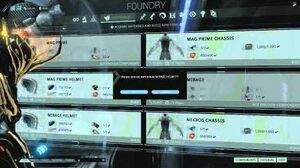 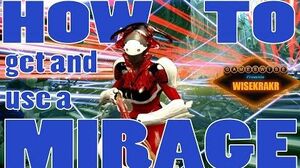