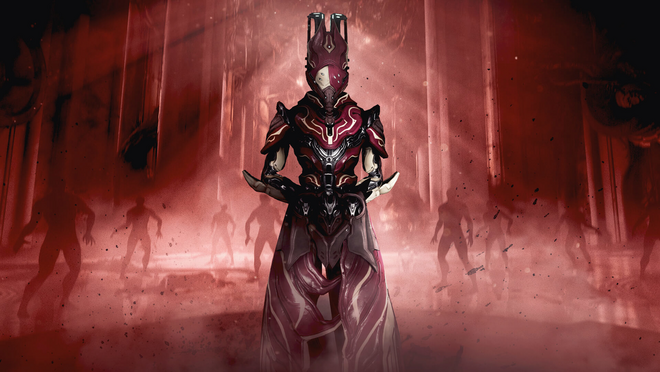 Ajouts :
In response to a disturbing transmission from Palladino, the Red Veil Syndicate’s spiritual medium, Tenno are compelled to investigate a dark, mysteriously abandoned Steel Meridian spacecraft found adrift. Inside the vessel, lights flicker and emergency lights strobe. All is quiet except for whispers of “Rap. Tap. Tap,” heard echoing throughout the lifeless craft. What does it all mean? Players must uncover the terrifying reality of what happened onboard, how the Red Veil might play a part in it, and more.

If you have completed The War Within Quest and have unlocked the Mot node in the Void the Chains of Harrow Quest will be automatically added to your Codex.

Chains of Harrow Quest is also replayable after completion - enjoy it all over again!

Always prepared to sacrifice. This monastic Warframe uses the Void to bolster allies’ defenses and amplify their lethality.

Get Harrow today by purchasing him in the Market for Platinum, or by completing the Chains of Harrow quest and finding his parts! His parts can be found in the Defection mission type, Grineer Fortress Spy missions, and from enemies corrupted by Void Fissures!

Passive: Harrow’s overshield cap is doubled. Condemn: Harrow casts a wave of energy that chains enemies where they stand. Each enemy held reinforces Harrow’s shields. Penance: Harrow sacrifices shields to boost reload and fire rate, while converting damage inflicted on enemies into health for Harrow and nearby allies (including companions). The more shields are sacrificed the longer the buff lasts. Thurible: Channel Harrow’s energy into the Thurible to generate a buff. The more energy channeled, the longer the buff will last. Once finished, killing enemies will bestow nearby allies with bursts of energy. Headshot kills reward four times the energy compared to body kills. Covenant: Protect nearby allies with an energy force that absorbs all enemy damage and converts it to a Critical Chance bonus that can stack up to 2x for all those under the Covenant for a short duration. The more damage is prevented, the bigger the bonus. Headshots are amplified even further.

6 x Syndicate Weapon Mods are back!

Previewed in the Operation: Ambulas Reborn, 6 Syndicate Weapon Augments are back and here to stay!

These can all be found in their corresponding Syndicates for Standing!
New Weapons!
Scourge

Harrow’s signature Primary weapon, the Scourge is a Corrosive spear gun that shoots wave projectiles with high Punch Through and guaranteed Status Effects. Thrown spears attach a bullet attractor to the heads of all enemies within 14 meters, and continues to pulse every 7 seconds and attaches bullet attractors for 3 seconds wherever it has landed.

Harrow’s signature Secondary weapon, the Knell, has the utility of a sniper with the sight and zoom with the convenience of a pistol. This single round magazine sidearm grants 100% ammo efficiency for 3 seconds (that can be refreshed when active) and 0.5x Critical Damage added per headshot with a maximum of 3 stacks.

An alternate helmet for Harrow. Find it in the Market or Alerts! Return to Warframe’s first planet with a completely new look. Earth Remastered offers improved volumetric lighting, a conversion to PBR materials, and a new vegetation system, which create a mood and atmosphere far more advanced than the original January 2014 update did.

The new lush forests of Earth are yours to explore. This Update turns the formerly good-looking planet into a stunningly lush, beautifully lit, alive, organically structured environment.

Note from our Sound Design Team

We’ve breathed life into Earth’s ambiance by adding a greater variety of unique sounds as you move between the different areas, connecting tunnels/paths, and between the day and night cycle. You can now experience the sounds of more unique wildlife in the lush forest heavy areas, while the overrun Grineer areas focus more on the clunking and chugging of their machinery. With performance gains and a clearer and more focused mix, Earth now offers a higher level of diversity, adding to the overall experience.