The energy flowing within this sheath changes to match the blade within it. The Nikana will cause the energy to flow like the current of a river, while the Dragon Nikana causes the sheath to rage with molten fury.

Add the Gemini Nikana Sheath to your Arsenal by visiting the Market today!

We have received reports of a factory that is developing artificial genomes for Tyl Regor. These genomes can restore broken links in the Grineer DNA sequence, producing many stronger clones. You must stop this from happening! Assault the forces at Tyl Regor’s factory and intercept any intel that can tell us more about his experiments.

Shut down the factory, Tenno!

New Augments have been added for the following Warframes, and can be purchased from the appropriate Syndicates:

Cut enemies down swiftly and precisely with the Tonbo Polearm. During the darkest days of the Old War many Tenno relied solely on the Tonbo to keep them alive.

Add the Tonbo to your Arsenal by visiting the Market or starting your Clan Research today!

Event :
HEART OF THE LOTUS

Valentine's Day is upon us! Whether that makes you feel like declaring your love from the top of a Relay or taking headshots on the Grineer, we've got some love-day items coming your way.

Kill them with kindness!

Show the enemy you care with the Eros Arrow Skin. This adds heart-shaped tips to any Bow Weapon you have equipped. Even Cupid will be envious!

Pick up some Eros Skins in the Market for 5,000 Credits each. To use your Eros Arrow Skin simply purchase the item in the Market and equip it in your Gear. Once in a Mission use the Arrow Skin just like a normal consumable item.

Does Valentine's Day have you seeing red? Or, does it make you tickled pink? Wear your heart on your Warframe's sleeve -- and well, all of your Warframe -- with the Valentine Color Picker.

Add a selection of love-ly color choices to your Arsenal! Purchase the Valentine Color Picker in the Market for One Credit.

Grab these Valentine-themed items before they're gone!

Missions with multiple factions will now have their Node labeled as Crossfire -- a new type of mission where Tenno can move amongst factions that are already engaged in combat with one another! The release of Crossfire Missions is a little premature (players began reporting it as a bug in their Syndicate Missions) but now that you’ve experienced the joy of walking into an active battlefield we can’t possibly take it away!

These Crossfire Missions will feature multiple factions, with objectives that are independent from either faction’s goals or motivations.

The following Missions / Rotations have been updated to include a pack of 5 Rare Fusion Cores as a reward:

Through our gameplay this evening as well as reports coming in from players, there appears to be a bug affecting the displayed reward vs. actual received reward in Survival Missions.

We noticed this when the UI said one thing (Forma), then we ended up with something else in the end-of-mission screen (Paris Prime Lower Limb).

We are currently investigating this issue and will have it fixed ASAP!

Thanks for your patience, it’s very appreciated. More than you know!

AKJAGARA The design of these hard-hitting dual pistols is a mix of organic and bladed elements.

URU Expressing the martial finesse and skill of its master, the Uru Sugatra complements the Uru Syandana used in the Tenno Absolution Ceremony.

Get these new in-game additions by visiting the Market today!

What are the Arcane Codices?

A new character and a completely revamped version of Spy Mode await you in the Stolen Dreams Quest. Embrace your inner secret agent, Tenno!

The Grineer have put out a capture order for a thief named Maroo – they claim she double crossed them and has sold precious Arcane Codices to the Corpus. Concerned for Maroo’s safety – and excited at the idea of a new Arcane Codex – the Lotus is requesting that you bring Maroo in.

Think fast, Tenno! You must plan your actions quickly and accordingly in this Quest. Failure to do so may alert the enemy to your presence and the Arcane Codex data may be destroyed.

Complete this Quest and you’ll be rewarded with an Ether Dagger Blueprint and a Catalyst Blueprint.

This new Quest is available for all players Mastery Rank 3 or greater.

While our old Spy game mode certainly had small spy-like focus in stealing intel, most of the time players were happy to loudly murder their way through the enemy to get the job done. Who could blame anyone? That’s why we sat down and gave Spy a total overhaul.

With new elements focused on avoiding laser grids and sneaking past guards, stealth is paramount in Spy 2.0. Being detected will mean losing rewards and bonus Affinity, even when the Mission is complete.

The following nodes have been updated to include this new Spy game mode:

Joining our updated Spy 2.0 are some exciting improvements to stealth combat! Players will now find that sneaking around each Mission may come with some excellent rewards. These alterations to stealth gameplay will continue to evolve based upon player feedback, but for now stealth aficionados can sink their teeth into the following changes:

We’ve made a wide variety of improvements to Warframe in some obvious, and not-so-obvious ways. The following is a quick list of changes we’ve made, and where you’ll notice them the most!

The following Mission Nodes on the Star Chart have had missing and mismatched rewards fixed.

In addition, changes have been made for Defense, Survival, Mobile Defense, Exterminate and Rescue. Previously these Missions were not properly balanced to reflect the Mission's enemy levels, sometimes resulting in fewer enemies than intended in higher level Missions and more at lower level Missions.

To simulate waves and grouped up enemies, previously survival enemy spawns cycled on and off for short periods of time. While it was a simple way of adding the desired pacing, we found that it was possible for players to get 'in sync' with killing enemies at certain times which left gaps of time where there were no enemies to kill and no enemies spawning, especially in higher level Missions with four players.

Spawning now fluctuates dynamically with each enemy spawned. Max spawn rate is the same, but it's now the time between individual enemy spawns which changes instead of a blanket 'on' or 'off' state for all enemy spawning. Hopefully you will start to see more consistent spawning in higher level Missions with four players, as well as squads of enemies attacking together. In our tests we found that there wasn't a notable difference in low level Missions.

Star Chart node changes have been made to balance the available nodes across factions, tilesets and difficulty. The following nodes have received changes:

This Update includes multiple improvements to sound immersion. Among these changes are:

There are a lot of variables that go into making an NPC more or less deadly, and accuracy plays a huge role in what enemies are most feared. These new adjustments to enemy accuracy will dramatically change how players handle foes.

Each enemy will have increased (or decreased) odds of hitting a player based on the type of weapon they’re using. Sniper rifles, for example, will have higher accuracy at long range but will be more difficult for NPCs to use in close-range combat. Not only that, but our new system allows us to create custom draw rates that make some weapons more difficult for enemies to aim quickly with.

These changes represent an ongoing state of development for our NPC accuracy; and we welcome player feedback on this subtle, under-the-hood change to be made in the appropriate subforum. For more information on our accuracy adjustments please check the following thread in our Developer Workshop: https://forums.warframe.com/index.php?/topic/395422-npc-accuracy/

Syndicate Daily Quests for Standing have received an Affinity overhaul! These changes should make Syndicate Missions much more rewarding to complete, in addition to decreasing the Daily Syndicate Standing Cap for non-Syndicate missions.

The following changes have been made to the Rakta Ballistica. Future adjustments may continue to be made, and feedback on any weapon are encouraged to be posted in the appropriate subforum. 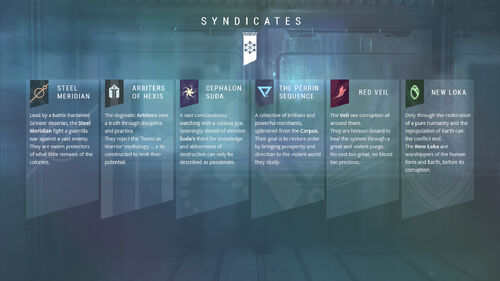