Today Fandom extended wiki custom theming to Discussions so there is a more unified look to the wiki. That means you also get dark theme here too! Leave any issues or suggestions regarding the topic in this thread and we can look into forwarding some concerns to Fandom. As far as we know, they are planning to add a theme toggle and changing local navigation later in the month.

I suggest placing an icon or just "(H)" after the warframe ability when it is subsumable. Therefore Garuda's 2 would be Blood Altar (H).

When trying to browse through the wiki as of a couple hours ago (was working fine several hours prior to making this post), internal links ended up being broken (i.e. switching between tabs of alternate enemy types, kuva lancer segment in the lancer page for example).

In a small box in the description of enemies, the text "javascript not loading, please refresh" (it cuts off at 'refresh') ended up displaying.

Javascript is enabled in my browser, and another browser was attempted.

Anyone else experiencing these problems, or is it just my computer?

Fandom just recently released support for embedding video and audio from third-party websites through the use of the EmbedVideo extension (https://community.fandom.com/wiki/Help:EmbedVideo). No need to upload Youtube video "files" to the wiki to put onto pages now!

Edit: Added a new template to support this feature (please use this when adding new videos) https://warframe.fandom.com/wiki/Template:YouTube

In the past Warframe wiki has been very in order having the list of all relic Categories with relics in alphabetical order, What reason, laziness and just maybe someone doesn't think it's important. Today and the recent list of all the relics IS WACKED.

Its time consuming and strain on the eyes when one has to go look at the list and search for the relic one is looking for.; If it's not too much to ask, may someone pls fix the lists and have all the relics in alphabetical order.

I've noticed that if more than one enemy template is present on a page the javascript for level scaling fails. This is apparent on the Profit-Taker Orb page.

I've tried to find the place where that javascript code comes from but I coulnd't find it. Can anybody point me to it, and I'll try to see if i can fix it

How & why is Fandom involved with Warframe Wiki??? They have screwed up an easy to navigate website with all their CRAP! I can't stand Fandom because of all the garbage they have added to the pages and how they made the pages harder to navigate and you have to dig further to get the same information you would bring up with ONE simple search on the old Wiki! Fandom SUCKS!

Hi there I was fishing around in some of the old primes and found that silver and aegis prime doesn't have a relic table and I have made up all the data to fill it with. I just don't know how to work with fandom templates as I haven't before. Just wondering if any moderators or admins could add this in for me

I've put the part you need on the page to the right in the box, the rest is my working and proof each relic is in historical order. I apologise if I missed any relics

Adding a timer for the tenet melee reset, since we already have a timer for everything else that rotates

(Chart of elemental combinations at the bottom)

I've definitively figured out how elements combine on the Tenet weapons that have an innate single element (Envoy, Spirex, Cyanex, and Agendus). It's actually relatively simple: Elements added through mods are always taken into account first, then the innate element and progenitor bonus element are ordered according to this specific order: HEAT > COLD > ELECTRIC > TOXIN, or HCET as I'll call it.

So for example, let's say you have a Tenet Envoy (innate cold) with electric as its progenitor bonus element, and you mod it with heat. The modded element (heat) is put first, then cold and elec are ordered based on HCET, so the final element order is heat, cold, elec. The first two elements combine, so you're left with Blast + Elec as your final elements.

For example, if you swap from cold to toxin, then the stat screen will show:

If you instead swap from cold to heat, then the stat screen will show:

You can swap between any two elements and you'll see that they always show up in the stat screen in HCET order:

Lastly, I made a table of elemental combinations so you can figure out which element you want for each weapon (in case you're trying to save mod slots by making certain combinations with just one elemental mod). I only show the combinations for Tenet weapons that have 3 different elements in total: one innate element, one progenitor bonus element, and one modded element. Any other situation can be figured out with just the normal elemental combining rules, so I'm not going to list them all out.

1. Im getting a message about an updated version of fandom and an updated fandom app.

3. I checked out the fandom.com page on smartphone right after the update message, and i gota say: the mobile page is even worse than the new pc desktop theme.

Btw, sry for writing it in the wf fandom, but since there is no general fandom, and i only use fandom for warframe, this is the only place i could write this.

I already wrote a reply in the app store. But since the devs ignore most of the negative reviews (just look at some of their answers to negative reviews) i thought maybe here it is bether. So other users can upvote this wich should be a bether indicator. Hopefully. ^^

It feels like 50% or more of the comments on these weapons' pages are "what element should I pick?" Having a section dedicated to describing the benefits of different elements would make the information more easily visible, as well as helping to clear up the clutter in the comments section.

If not it's own dedicated section, recommended element(s) could at least go at the top of the Tips section with a unified format on each Tenet / Kuva weapon's page.

Toxin: Allows the weapon to achieve viral damage by adding just a cold mod, saving a mod slot for other useful mods like Firestorm or Hunter Munitions.

Heat: The occasional heat procs will strip 50% of the enemy's armor, as well as giving another elemental status for Galvanized Aptitude (if equipped)

Magnetic: A combination of modded viral damage and bonus magnetic damage will allow the weapon to deal will shielded enemies as well as non-shielded ones. Synergizes well with Galvanized Aptitude

Radiation: Radiation has strong damage modifiers against grineer Alloy Armor and Infested Sinew armor, allowing it to deal with armored targets without relying on slash procs from Hunter Munitions. Radiation procs can also be used for crowd control to great effect on AoE weapons like the Kuva Bramma, and synergizes well with Galvanized Aptitude.

The tennotable table class does not have a dark theme equivalent. This hurts overall readability. Refer to the Sentinel Cosmetics page for an example of the issue.

These new search buttons suck, I'd rather just click-type-enter on the old top search bar. 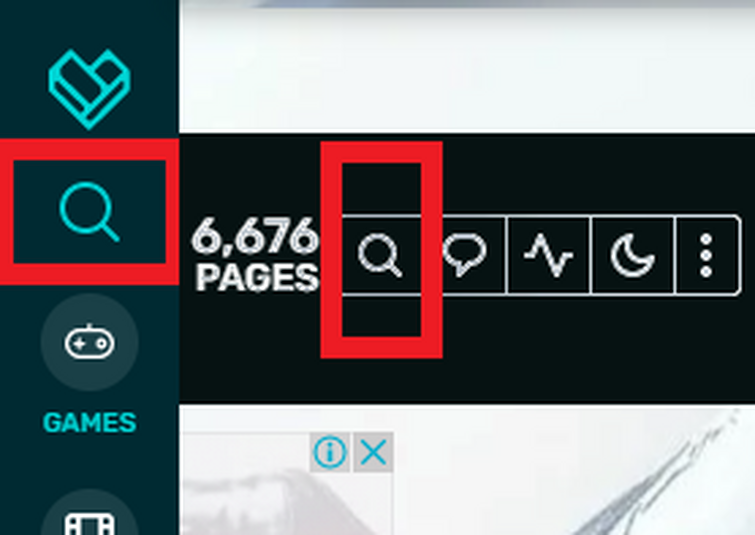 These buttons force me to move mouse after clicking them, so in a way they make searching more difficult as the other search bar all I had to do was click on the textbox, type and hit enter.

Added derived stats (average shot, average burst DPS, average sustained DPS, and status chance per shot) to https://warframe.fandom.com/wiki/Weapon_Comparison. A table legend is added to the bottom of the page for details on column contents. For the statistically inclined, a CSV table for gun stats is generated at the very bottom from our weapon database at

https://warframe.fandom.com/wiki/Module:Weapon/data. Some planned features include melee DPS stats for each melee/stance combo. Let me know if there are any issues or suggestions.

Edit: Currently having a debate over the usefulness of 'Lifetime Dmg' column which can be also be interpreted as 'Total damage per ammo reserves'. Is this an important statistic regarding a weapon's ammo economy?

Posted this on the Discord, but I figured most editors don't actively talk in there so:

Also just want to let those contributing to M:Weapons/data know that for AoE weapons please copy pasta the crit/status/fire rate stats from the main attack to the AoE component. For now, treat them as separate attacks since they are in different key-value pair.

Who is the most active tenno in fandom. Either it's editing or posting something.

If the wiki asks you if you want to try out the new layout, don't do it. 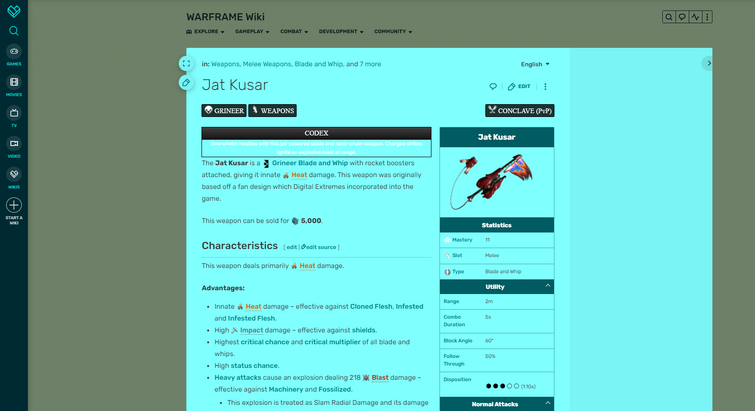 It uhhh... doesn't look quite ready yet.

(If we ignore strange design decisions like making the search open up a new box instead of just being there all the time. Like, whose idea at fandom was it to make searching stuff more annoying?)

I found an error