There's something I need to ask you... in person. Come see me in a relay and we'll talk.
—Darvo

Players will receive a message from Darvo in their inbox, asking them to come see him for an urgent matter. Players must then visit Darvo in any of the Relays, and interact with him using the prompt What's the job?. This will add the Aventura to the Códice, from where it can be activated to unlock the first mission.

The first mission takes players to a Rescate mission on Urano to find and free the contractor, whom Darvo explains has a flaw making him disobedient to the Queens, and had been on the way to retrieving an artifact when he was captured.

Upon arriving at the prison complex, the termination timer of 2:30 minutes will immediately start regardless of player action, making the task of freeing the contractor from the pod a race against time. Large amounts of Grineer reinforcements, as well as Leekter from the Los tres Grustrag, will arrive to hinder any attempts at retrieval. The hostage, revealed to be named Clem, must be safely extracted to complete the mission.

You did it, you got Clem. He's a special guy, you know. Little weird but hell of a fighter. And that's the thing, he still needs your help to retrieve his custom weapons.
—Darvo

Back on the Liset, Darvo informs the player that Clem will need his custom-made Grakatas gemelas to be fully combat ready, and thus sends them on a Salvage mission to retrieve them.

Clem will accompany players on this mission, initially equipped with a Latron to fight off enemies, with Darvo lamenting how Clem is helpless without his custom weapons. The custom weapons, which turn out to be a pair of Grakatas gemelas, can be picked up on a barracks room, and will be equipped by Clem when acquired. Once retrieved, Darvo informs the Tenno that Clem wants to deal with the ones who took the Grakatas gemelas, pointing players to an Asesinato target. The target turns out to be Vem Tabook of Los tres Grustrag, whom players have to kill before extraction.

Clem has his Grakatas, now its time to get down to business and liberate the artifact. If you help Clem we can all share the spoils.
—Darvo

The third mission is a Supervivencia mission on Urano, as Darvo finally assigns the Tenno to recover the artifact that Clem had originally been assigned to.

Clem again assists players, still armed with his Grakatas gemelas, as they distract the Grineer while another of Darvo's agents finds the artifact. This mission will play on as a standard survival mission, until around 3 and a half minutes away from completion, when the Tenno will be attacked by the last remaining member of Los tres Grustrag, Shik Tal. Upon finding the relic, Darvo calls it "The Potent Orokin Technical Augmentation and Tactical Offensive device," which he acronyms as POTATO. A Clem Clone Blueprint will be rewarded upon completion and extraction.

When the player finishes the mission, Darvo will ask them to come to a relay so they can thank the player in person. The player will receive an Adaptador Exilus when Darvo finishes talking.

Upon completing the Aventura, players can visit Darvo in a relay and use the prompt "Does Clem need my help?", which will trigger a Survival mission largely identical to the Aventura's final mission. At the five minute mark the Cell will be attacked either by Shik Tal, the Lynx, or a Juggernaut, depending on whether the Cell is fighting the Grineer, Corpus, or Infested respectively. This mission is repeatable, but can only be performed once every seven days after successfully completing it. As with the Aventura mission, the weekly mission will give a Clem Clone Blueprint as a reward. 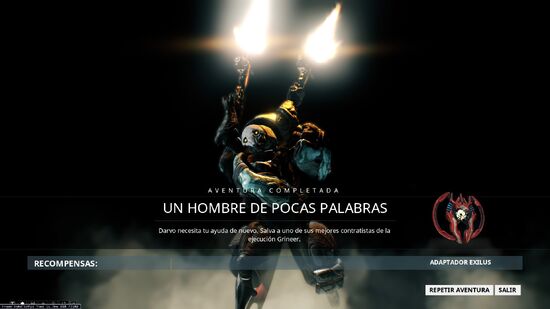