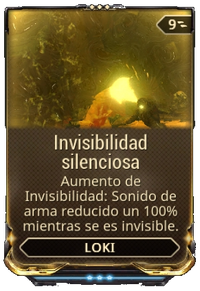 Loki that allows it to reduce the Nivel de ruido of weapons fired.