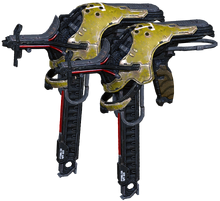 Las Gremlins Gemelas son a pair of Grineer nail guns that fire bolts capable of impaling and pinning enemies to walls at full-auto.

Its plano can only be obtained as an end-of-mission reward for defeating the dual bosses, Teniente Lech Kril and Capitán Vor, on Exta, Ceres. It will not drop from their individual boss fights on Marte and Mercurio respectively.