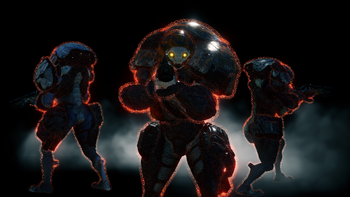 Eximus units (until Actualización 13.0 referred to as Leader units) are a category of special 'elite' variants of standard enemies introduced in Actualización 12.0 that can appear in any mission type. They come in several varieties, each with special abilities (some of which are similar to Tenno abilities) and are usually much stronger than an average member of their faction, although effects vary from type to type. Eximus spawn 10-15 ranks higher than the rank average for the mission at hand, along with the highest increase in stats and resistances, posing a reasonable challenge for under-equipped or inexperienced Tenno.

Almost any base unit type (Osprey, Lancer, MOA, etc.) can spawn as an Eximus, though certain units can only spawn as a particular Eximus type, e.g. Chargers can only spawn as Parasitic Types. They can easily be identified by their special auras and larger sizes, and frequently have unique textures/skins to make them more visually distinctive.

All Eximus units were given their own Codex log, essentially doubling the Codex library. Some factions may have only a certain type of Eximus that the others do not have, such as how Shock and Blitz Eximus are exclusive to Corpus units. Additionally, all Eximus-type units have a chance to drop components for the Oberon Warframe when defeated.

Upon death, Eximus units provide 450 - 500 additional base affinity gain of their regular counterparts, before calculated by their level differences.

Defends itself with a radial Blast Attack.

Blitz Eximus units are capable of casting Seismic Shockwave, which knocks down nearby opponents. Eximi of this type have an innate resistance of 50% to all damage types, added additively from all three of their health type, shield type and armor type.

Blitz Eximus are exclusive to the Corpus, mainly appearing on all models of MOAs and some Crewmen.

A tank who drains Energy from nearby enemies.

Energy Leeches/Parasitics units are capable of draining players' energy within 15 meters at the rate of 5s−1 (stackable effect). These Eximi are commonly close combat units such as Corpus Prod Crewmen and Grineer Butchers, as well as the Corrupted versions of the latter. Infested Energy Leech Eximus units use the prefix Parasitic Eximus, and are extremely common among all types of Infested. Eximi of this type have 300% of their base health and shield and an innate resistance of 50% to all damage types, added additively from all three of their health type, shield type and armor type.

Heat based attacks and auras

Arson/Caustic Eximus units project a fire resistance aura their allies nearby, which nullifies all

Fire damage, this aura also extends to combined damage and will nullify the

Fire damage of combined types utilizing it. They have the ability to release a Fire Blast similar to the one used by Ember, damaging and knocking down any enemies who are caught in the blast. The knockdown can be negated by blocking with a melee weapon or rolling. Eximi of this type have an innate resistance of 50% to all damage types, additive to all three of their health type, shield type and armor type.

These Eximus units will release their fire wave when enemies are close to them, and are capable of dealing significant damage to Sentinels at higher levels; caution is advised when engaging them at close range.

The Infested uses the prefix Caustic instead of Arson; these behave largely the same, and are capable of releasing a Fire Blast. This Eximus variety is common among Grineer, including Corrupted versions, but the Corpus do not field any kind of Arson Eximus.

Restores shields of nearby allies.

Guardian Eximus units are especially durable, gaining a significant boost to their own shield durability as well as the mentioned shield-restoration effect. They release radial shield charge in a blue-grid restorative pulse. Eximi of this type has an innate resistance of 50% to all damage types, added additively from all three of their health type, shield type and armor type.

Guardian Eximus units are exclusive to the Corpus (and their corresponding Corrupted counterparts), which should be of little surprise given their fairly extensive use of shields. Eximus units of this type are usually MOAs, Orokin Drones, and Ospreys.

Cold based attacks and auras.

Arctic Eximus units projects a cold resistance aura their allies nearby, which nullifies all

Cold damage, this aura also extends to combined damage and will nullify the

Cold status effect to the Arctic Eximus' foes, greatly reducing their movement and attack speed. They can generate a temporary Snow Globe barrier to protect themselves and allies. Their version follows them when they move as opposed to being stationary like Frost's, and has a unique and distinctive Truncated Icosahedron design to it. They have additional ice-based attacks as well. Eximi of this type has an innate resistance of 50% to all damage types, added additively from all three of their health type, shield type and armor type.

Arctic Eximus units are among the most dangerous variety, as their ice slowdown aura is fairly large, whilst their snowglobe protects them from ranged attacks. Certain targeted powers, like Oberon's Smite and Volt's Shock, can damage the target through the snowglobe. Like the regular Snow Globe, inflicting enough damage will cause the Arctic Eximus' Snow Globe to disintegrate. Note however that the globe had object-based health and is not affected by crit damage, rendering crit-focused weapon to be less effective than raw damage weapons. The globe also dissolves by itself after a certain amount of time, therefore hiding in cover and waiting for the globe to dissipate is an alternative tactic. Multiple Arctic Eximi are especially dangerous, as their slowdown aura stacks with other Arctic Eximi, which can slow the player to a crawl.

This unit variant is reasonably common amongst the Grineer and Corpus (including Corrupted versions of both), but nonexistent among the Infested.

It is possible for Grineer Napalms and Scorches to spawn as Arctic Eximi. If the player suffers a fire proc while within the Eximi's aura, the fire proc changes to a Blast proc (possibly a bug, imperfect chance of happening).

Leeches and Sanguines regenerate health by inflicting damage. This is easily observed after damaging them as they will regain health from damaging a target's shields/health, or a target that has Iron Skin active. Eximi of this type have 300% of their base health and shield.

Leech Eximus units are common in Grineer ranks, but are nonexistent in the Corpus. Corrupted Eximi can also spawn in this variant. Infested Eximus units use the Sanguine prefix instead of Leech, but otherwise behave identically. This should not be mistaken for the Energy Leech prefix noted above.

Electric based attacks and auras.

Electricity damage. This aura also extends to combined damage and will nullify the

Electricity damage of said combined type. They also emit a

Electricity status effect aura that affects all enemies within a 5 meter radius – players within a 2 meter radius will take damage at a steady rate. The effect is constant until the Eximus is defeated or until the Tenno moves out of range. Shock Eximus units are exclusive to the Corpus (and Corrupted Crewmen), typically appearing on Elite Crewmen or Corpus Techs. Eximi of this type has an innate resistance of 50% to all damage types, added additively from all three of their health type, shield type and armor type.

Toxin based attacks and auras.

Venomous Eximus units projects a toxin resistance aura their allies nearby, which nullifies all

Toxin damage, this aura also extends to combined damage and will nullify the

Toxin damage of said combined type. They are capable of delivering

Toxin attacks towards their adversaries and also have the ability to emit a potent aura of toxins to their surroundings in a 10 meter range. When inflicted, an 8 second

Toxin proc will persist and deal moderate damage over time, depending on the level of the enemy which inflicted the proc. Venomous Eximus units are exclusive to the Infestation, appearing on Ancients (and their Corrupted counterparts), Boilers, Brood Mothers, and Mutalist Moas. Eximi of this type have an innate resistance of 50% to all damage types, added additively from all three of their health type, shield type and armor type.

Classified as an eximus, a Synthesis target is a marked target for Cephalon Simaris. Synthesis targets have far more health than their regular counterparts (preventing players from killing them accidentally, though it is possible for players to kill them regardless), and have at least 3 nodes visible through the Synthesis Scanner. Scanning at least one node will cause the Synthesis target to run away from the player and gain a random special ability to evade capture, like leaving a trail of

A unique variant of Eximus units exclusively for the Grineer Guardsmen on Ceres, that provides near invulnerability on itself and to its allies while remaining vulnerable to a single primary elemental damage type. Eximus types vary between Shock, Fire, Ice, and Toxic.

A special Eximus variant of the Wardens introduced in Rescue 2.0 missions, featuring Life Leech and enhanced movement speed. However, they are extremely vulnerable to stealth attacks, and will most likely receive fatal damage from it.

Slash damage, and only is slightly weak to

Viral to be made while saving a mod slot for something else.

Magnetic aura, draining the energy and shields of any Warframe that got too close. This feature was rendered inert from the Cold Revenge Tactical Alert to Revisión 18.5.1, before the developers changed the aura to