Ordis will then direct the player to Syrtis, Marte to tap into Grineer communication towers in the hopes of successfully scanning for the Limbo signal. In practice, the mission provided is an Archwing Interceptación mission that will require players to complete a single round. However, the primary objective of the mission is not in the Interception mission itself (which provides no reward), but in collecting Proof Fragments that drop from killed enemies, which resemble Energy Orbs.

Once the required number of Proof Fragments is collected and the Interception mission completed, the Limbo Theorem blueprint can then be crafted, which will take 60 seconds. Upon building it, Ordis comments at his curiosity of the Limbo Theorem, eagerly awaiting for it.

Good, now we get to find out what all this Limbo nonsense is all about. I await the theorem's completion.

After it is complete, Ordis will attempt to read the Theorem, only to be annoyed by even more nonsense the supposed evidence provided.

Okay, good, you've... wait... the horizon mass cannot be inverted to – this is preposterous!

Operator, I'm sorry. You did all this work and this so called Theorem is still completely invalid. It's as if all these proofs point to notthingness it's just utterly irrational!

There's only one valid coordinate in the entire proof, I've marked it on your navigation console but I'm sure it's a waste of time.

In the end, Ordis will lead the player to the only coordinate that he managed to obtain from the proof: Cambria, Tierra.

The player is directed to Cambria, Tierra on an Excavación mission to check out Ordis' lead. This mission will reward mainly Alijos de crédito, with a chance of rewarding the Limbo Neuroptics Blueprint (Low chance on Rotation A, higher in Rotations B & C). Once obtained, Ordis will rethink his opinion on the Theorem and will attempt to make more sense of it:

A Limbo part blueprint! The Theorem wasn't complete malarkey after all. Perhaps there's more to these equations than I previously thought, what am I missing.

In the meantime, players must craft the Limbo Neuroptics, which will take 12 hours.

When the Neuroptics is completed and claimed by the player, Ordis says the following:

Operator, I found a new theorem hidden deep in that Warframe part. These are actually starting to make sense, I mean they're nonsense but there's logic in the nonsense. It's almost as if someone's trying to speak to me in my own language.

What is he trying to say? My apologies, operator, I get a little worked up when it comes to physics.

Ordis will once again send the player to Syrtis, Marte to gather more Proof Fragments in order to craft Limbo Systems Theorem.

After Limbo Systems Theorem is completed, Ordis will send the player another coordinate. He will also extrapolate his findings about the existence of the Rift, and its connection to Limbo.

Now it's becoming clear. Could it be that there's a plane between our normal plane and the void? A space between space, a rift? A rift that this Limbo could control?

Oh and I've marked your navigation console, I think you'll be quite pleased with what you find there.

The player will undertake another Excavación mission to extract a Limbo component, this time in search of the Limbo Systems Blueprint found on Martialis, Marte. Once acquired, Ordis says the followings:

Operator do you understand, this Limbo is telling us his story in pure math, and I must say, he's quite witty.

You have to forge that blueprint as soon as possible. I must know what comes next.

Once again player must craft Limbo Systems before moving on to the next step.

After Limbo Systems is completed and claimed. Ordis has these to say:

Just as suspected, another theorem. Limbo's formula for inverting the entropic mass of void quantum is downright naughty.

I want more, Operator, please hurry, this story is getting quite good.

After Limbo Chassis Theorem is completed and claimed, Ordis comments on this new finding:

More parts to the story. My word, he is a magician of logic. Just when I think his diffraction principle is full of dangling ratios, he expresses his dynamic constant in pure numbers. I never saw it coming.

The player is finally directed to Ose, Europa to conduct a final Excavación mission in search of Limbo Chassis Blueprint. After acquiring the blueprint, Ordis is excited about the discovery of the last piece.

The final part. I cannot wait. What harrowing leaps of cross-dimensional gymnastics will he attempt next?

The player must construct the Chassis in order to progress in the Aventura. Note beforehand that the Chassis requires an Cristal de Argón to make. Upon claiming Limbo Chassis, Ordis eagerly reads the rest of the Theorem, only to find out Limbo's death in the process.

Excellent, the final Theorem and it's unfragmented. Processing.

Operator, I think I know why we're finding Limbo parts scattered throughout the system. His final rift walk was a miscal... disaster. Well, perhaps when you occupy this frame, you will use more... caution.

When Limbo Chassis is claimed, the Aventura is considered completed and player can start building Limbo with Limbo Blueprint from the Mercado. 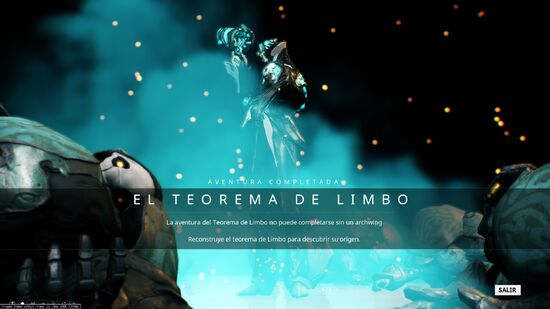