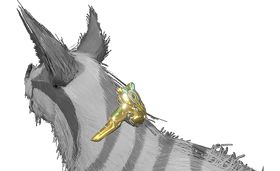 The Kavasa Prime Collar is a Prime collar of Orokin design that can be equipped on a player's Kubrow. It records their genetic memory and DNA, allowing them to be reconstructed in an Incubadora, just like the Taichen Collar. Equipping the collar grants +10 Salud, +10 escudos, and +100 Armadura to a kubrow. Salud bonus is modified by Estabilizador de ADN.

On August 23rd, 2017, it was announced that Kavasa Prime Collar would enter the Prime Vault and be retired from the reward tables on August 29th, 2017. Any preexisting components or fully-built collars will remain as is.