The OBEX system multiplies the kinetic energy of a Tenno's kicks and punches, delivering devastating blows to any target.

Shadows of the Dead
&#xD; Agregados:

Find his alternate “Raknis” alternate helmet in the Mercado or Alerts! . 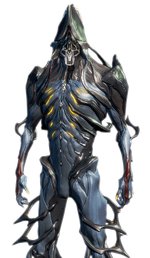 Supervivencia missions are here to stay and can be played by choosing Survival Missions on the Starchart. Our Survival weekend gave the team some early feedback on playability and difficulty, and our new Survival missions are ready for your Warframes! Survival missions will get more challenging the further you travel through the solar system. Expect to face lower level enemies closer to the sun, and higher level enemies as you reach the outer planets.
The enemies you face will be prepared to take on the strongest Tenno – the longer you play, the higher the stakes!

Survival now takes place in procedurally generated levels, allowing greater mission variety, challenge, and replayability.
Weekly leaderboards are now live for all survival missions on the Starchart!
All Raid (Asalto) Void Keys have been retroactively replaced with Survival missions.
A handful of our new mods can be found by playing Survival missions, good luck!

Dueling is no longer restricted to clans!
An ancient Tenno tradition has reemerged; THE CONCLAVES have started appearing throughout the Solar Map. Here the Tenno meet in secret to challenge each another in honorable combat. 1v1 and 2v2 Conclaves have been added through the Solar Map. Are you ready to test your skills?

What happened to the Orokin places that did not get hidden in the Void? Search the solar system for co-ordinate crafting components in loot containers to locate the mysterious Derrelicto Orokins.

Lurking in the very depths of Derrelicto Orokins is the Golem. Find his coordinates within the Derelicts today!

More tiles added to the Asentamiento Grineer maps on Fobos!

NOTE: Tenno, this is an experimental option we have introduced with the goal to improve performance on multi-core machines. Let us know if you notice higher frame-rates with this option! This option may not be for everyone, disable it if you encounter problems!&#xD;